Yelp is on its way 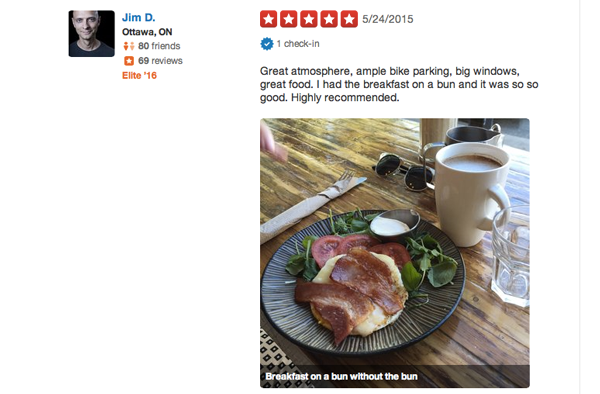 In 2015, Yelp incorporated bike parking into reviews. There was no fanfare, but it is a big deal. Why? No parking means no business, and that goes for bicycles as much as for cars.

Heather Farley offers a case in point. A couple of years ago, the Oakland-based software developer and her car-free family tried holiday shopping at a toy store not too far from their home. When they rolled up in their cargo bike they found no racks nearby. The family found another toy store—farther from home, but one where they could easily park their bikes. Farley makes a point of shopping where bike parking is convenient and secure. “It’s reassuring to know there is safe bike parking close to the store. I worry less about theft when I know it’s in a well-lit, high-trafficked area near a store’s entrance,” she says.

Chicago commuter José Terrazas says that “more than likely I’ll just skip the stop” if he has to park more than a block or so away. Now that Yelp lists bike parking, he uses the feature, but then goes one step further. “I like to see for myself via Google street view, just in case parking is not ample enough and to see whether there are other viable alternatives, like racks across the street or a couple doors down.” Farley and Terrazas are just two examples that show how high quality bike parking is one of the loudest, clearest signals businesses can send to announce they want to reach customers who shop by bike.

Yelp was responding to customer demand by implementing the bike parking notation. “As with many of our attribute features, the suggestion came from our users,” said the company’s public relations specialist Katrina Hafford.

Stacy Neff of One More Cup, a café in Kansas City, Missouri, says it’s great to see Yelp now highlight bike parking. Neff and her husband, Jeremy, have long understood that bike parking holds the key to welcoming their bike riding customers. They installed a bike rack behind the shop about six years ago and the following year their neighborhood’s business improvement district installed racks out front. “Our shop is in a very bike heavy neighborhood, so it’s important for us to offer accommodations for those who want to ride their bikes here.”

With cities building better bike lanes and new trails opening all the time, committed commuters and weekend warriors alike build demand for bike-friendly business. The addition of bike parking in Yelp reviews shows that smart businesses need to keep warming up to these customers, says Yasmeen Schuller, president of The Chainlink, a Chicago community bike advocacy organization. “Having bike parking as a Yelp category is fantastic because it is further solidifying how important it is for businesses to request a bike rack from the city. Bike parking is becoming essential to businesses.”