Washington, DC’s Department of Transportation (DDOT) recently presented a set of preliminary concepts for extending the 15th Street green lane north for 1/3 of a mile and improving the intersection through which it passes, including adding more bike lanes. The 15th Street green lane is a one-mile long,  bi-directional cycletrack extending from iconic Pennsylvania Avenue past the White House and through Lafayette Square to the hip U Street neighborhood. Opened in 2009 and modified in 2010, the cycletrack has been a huge success.  A 2012 evaluation of the cycletrack’s use showed a 205% increase in bicycle volume on the street after the cycletrack was installed.

At an neighborhood community meeting this month, DDOT presented preliminary concepts for the two blocks of 15th Street NW north of U Street. Currently, the green lane south of U is on the west side of the street. North of U, there is a bike lane on the east side. This requires a cyclist heading north to navigate from one side of the road to the other at the busy 15th and U intersection.  And since 15th Street is a one-way northbound street, it means that cyclists heading south must either use another street or the busy sidewalks.

The new design would solve these problems by extending the cycletrack north along the west side of 15th all the way to Euclid Street. This would take the green lane up the steep and historic Meridian Hill and past the old city limit. With the new design cyclists heading north could stay on the west side, and cyclists heading south can now get off the sidewalk, and they likely will. When the cycletrack south of U was added, sidewalk cycling nearly disappeared.

The design of the new section could be a significant step up from the existing sections. Similar to the existing sections, the new section will be separated from traffic by parked cars, and one proposal limits the design to that and the white safe hit delinators found south of U. But other options elevate the green lane, change the pavement material, to permeable pavement which would make it stand out from the road, and separate the lane from parking with either a low barrier or a low barrier with bollards. Tree boxes would separate the green lane from the sidewalk and in some designs bioretention stormwater gardens would separate the lane from traffic near intersecions.  DDOT is still considering the various options. 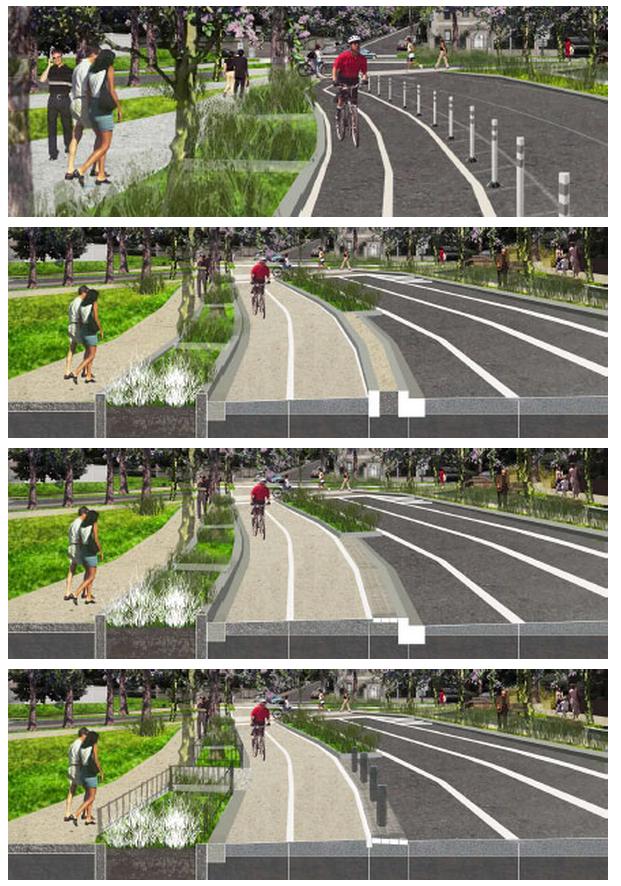 The proposal includes further improvements for people on bikes as well.  There would be a complete redesign of the complicated intersection of 15th St, W St, Florida Ave and New Hampshire Ave. This would slow down automobile traffic and reduce conflict zones. It would also add bike boxes at the intersection, and a bike lane on Florida Avenue northeast of 15th Street.

There is still more design and outreach needed before this project breaks ground. DDOT had to decide which cycletrack design they want to pursue. Designers will have to deal with a bi-directional cycletrack on a steep hill, where downhill riders could be going very fast, and uphill riders could be struggling. And DDOT will have to address any concerns from the community.  No schedule yet exists for the implementation of this program, but DDOT has promised to come back to the same community meeting with updates in a few months.
This represents a positive step forward. Such a design would make the area safer for everyone, improve the environment and increase mobility.