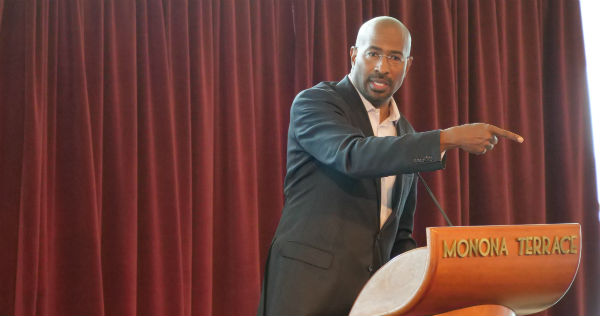 Democracies are built on disagreement — and social movements win when they can unite people who disagree.

That was the message 270 biking and city-building professionals at the PlacesForBikes conference in Madison heard Thursday from social entrepreneur and CNN commentator Van Jones.

Jones, the son of a Tennessee high-school teacher and middle-school principal who earned a Yale law degree and built a career uniting unlikely allies around issues like green jobs and criminal justice reform, called in his keynote for biking believers to find common causes with people of different perspectives.

Jones, who described himself as “on the left side of Pluto on every issue,” said his work to reduce prison populations has advanced in part because he’s built an alliance with archconservative politician Newt Gingrich.

“We’re far from each other and that gives us strength,” he said, spreading his hands wide to suggest the wings of a plane.

Jones said he’d learned the same lesson while opposing a juvenile “superjail” in Alameda County — a campaign that was failing when it was coming only from poorer Black and Latino families in central Oakland.

“We didn’t have enough power to stop our superjail,” he said. “[But] it turned out, much to our great joy, that there were people on the far side of the county where the prison was going to be placed who didn’t want the prison.”

Jones described some of the project’s opponents as racist. But he said his team joined “arm in arm” with them to block it.

“I’ve never heard so much offensive stuff said at a county board meeting,” he said. “And I’ve never clapped louder.” 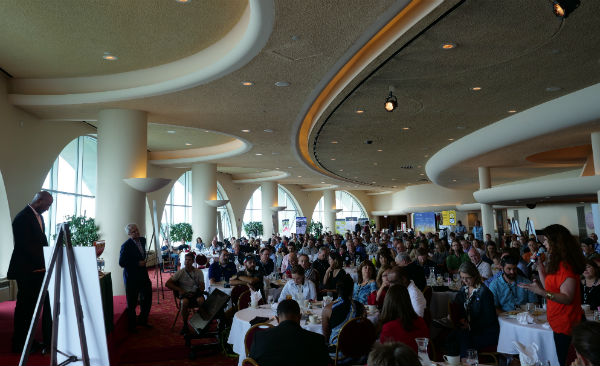 Reaching the unconverted, Jones suggested, applies to the politics of transportation and recreation as much as to criminal justice or solar power.

“In democracy, you’re supposed to disagree,” he said. “Constructive disagreement means you end up with a thesis, an antithesis and then a synthesis that’s better. And we’ve forgotten that. — This is all stuff your grandparents will tell you.”

The key, he said, is to “argue long enough, with big enough ears and big enough hearts.”

Jones had pointed advice for diversifying the biking movement.

“What brought you into the movement is not necessarily what’s going to bring the next person in,” he said. “You got involved with something because you care about the polar bears or you care about getting fit and trim. And all of your literature is about that. Which means you’re going to pull in a lot of people just like yourself. And you’re going to say, ‘Why are these other people so stupid where they don’t know what we’re talking about? Maybe I just need to say it louder. Or I need to say it on Twitter.'”

“Politics in America, it’s not become partisan or hyperpartisan. it’s become tribal,” he said. “This is a very dangerous thing in a democracy.”

On the national scale, Jones called on his fellow liberals to respect poor conservatives for prioritizing their values over their financial self-interest, just as a rich liberal might be.