Steal this idea: A $600 protected bike lane demo at an open-streets event 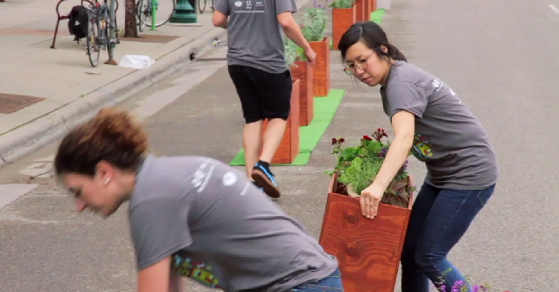 Sometimes the best ways to spread the idea of protected bike lanes are the simplest.

In Minneapolis, where a new community coalition has set a target to build 30 miles of new protected bike lanes by 2020, fans of protected bike lanes hit on a cheap and easy way to reach the heart of their target market — people who like to ride bikes but feel uncomfortable mixing with auto traffic.

They got together to construct 15 plywood planters and then set them up at each of the city’s four summertime Open Streets events. Here’s a video showing how it looked at the event:

As you can see in the video above, a volunteer simply flagged passers-by into the “pop-up” protected bike lane.

Andrew Kuncel, who organized the demonstration, called the one-block demo a “gold mine” for building the new coalition’s list of public supporters.

“When they get to the end, you can basically get them to sign any type of petition,” Kuncel said. “It just makes sense.”

How to build it 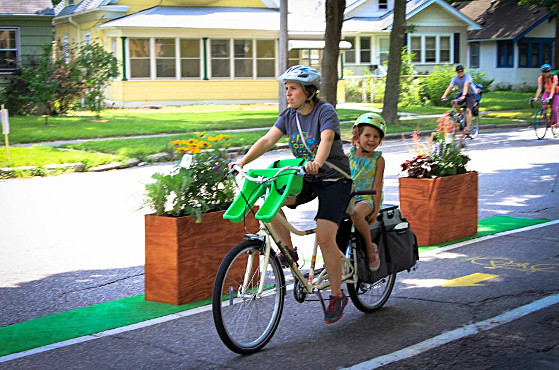 Photo by Kristina Perkins for BikewaysForEveryone.

Kuncel said the whole operation cost about $600 for materials, though he suggested that other groups should try something lighter than plywood. The assembly took 10 people in a three-hour build session, and on the day of each event Kuncel rented a truck to haul them to the target location and set them up over the course of 100 to 250 feet.

“You don’t need a whole lot of space to get the point across that you have a space to ride your bike that’s protected from cars and pedestrians,” Kuncel said.

A smaller expense was the plants that topped the boxes. Kuncel’s team convinced local nurseries to lend them the plants for free, and the group paid for the nursery workers’ labor.

“One of the main appeals to non-cyclists is that it helps beautify an area,” Kuncel said. “That’s kind of a key element that really makes it feel like you’re not on the road.”

Nice Ride, Minnesota’s bike sharing system, also set up a nearby kiosk to demonstrate how to use the system for free. Kuncel also notified the city in advance about the location for the demo.

In the video above, Minneapolis Bicycle Coalition President Molly Sullivan explains why she was excited about the demonstration.

“My vision is that this campaign is successful, we have 30 miles of protected bikeway, and I can bring my kid everywhere we need to go. The kid bikes to school with me, the kid bikes to daycare with me, we go to the gym together, we go to the park together, all on our bike. And that bicycle ridership increases throughout the city so much so that the city says, ‘This is not a nice to have. This is a need to have.’ This fundamentally changes the way people get around Minneapolis.'”

Update, August 14: Eight months later, the idea has been successfully stolen! People across the country were inspired by this project and did their own demos.

The Green Lane Project is a PeopleForBikes program that helps U.S. cities build better bike lanes to create low-stress streets. You can follow us on Twitter or Facebook or sign up for our weekly news digest about protected bike lanes. Story tip? Write [email protected] Correction: a previous version of this post attributed the final quote to the wrong speaker.