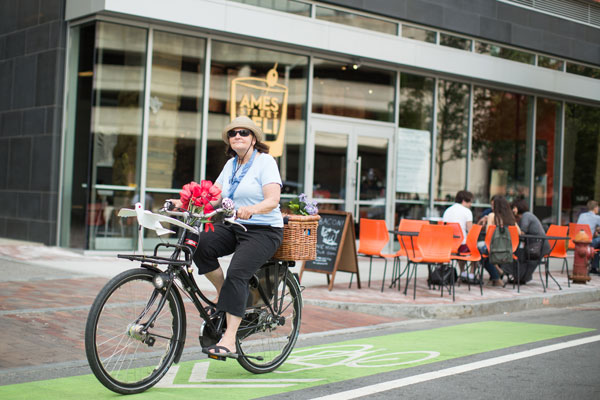 She got that giddy look so common to kids on Christmas day when I rolled out her bike with its big red bow, just like my grandmother did for me when I was little.

“I’ve never had a brand new bike before!” she squealed–little sister life always meant lots of hand-me-downs. I shoved a helmet in her hands as she was halfway out the door, already concocting fancy plans for a basket so she could bike to the beach one day. After an hour of riding, she kept trying (and failing) to pop a wheelie.

I said the only thing you can say in this situation.

Grandma’s bike–a foldable model with a low step through (and, eventually, a basket)–turned neighborhood walks into daily rides that over time went all the way to the beach. But the best part about my grandma’s story is that it’s not unique–well, outside of the wheelie part.

According to PeopleForBikes U.S. Bicycling Participation Study, 19% of people 55 years or older rode a bicycle in 2014.

Bicycling’s low-impact nature and scalability make riding an excellent option for active adults who are moving away from higher-impact activities like running. Studies show that bicycling is associated with decreased risk of coronary heart disease, improved coordination and cognitive function, and decreased rates for type 2 diabetes. 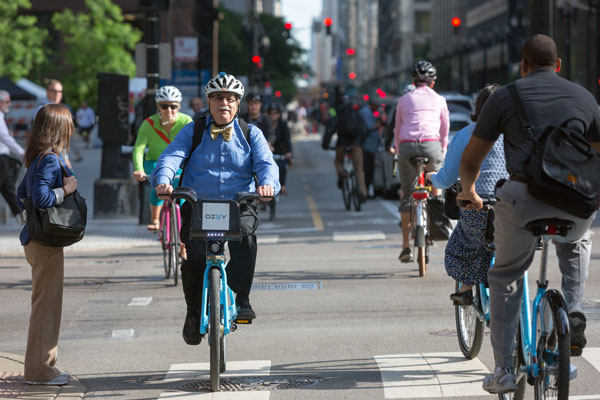 For some, freedom is pedaling around the neighborhood on a trike, for others it’s riding their age in miles every birthday. For the Arkansas Trail Dogs–a ragtag group of the youngest septuagenarians you’ll ever meet–freedom means spending their time working on trails, biking and eating pie at the local diner.

Trail Dog Wilburn Powell offers a simple explanation as to why the group enjoys collecting miles on scenic roads and cruising singletrack in the Ouachita National Forest. “It’s like being a kid again,” says the 73-year-old, whose claim is backed up by an impish grin, six-pack abs, and a never-ending supply of stories that begin, “I was just riding along, when…”

As we age, obstacles to bicycling can range from physical limitations to lack of bike storage, but there are several options to get you rolling whether the goal is to ride with the grandkids or to complete your first century.

The right bike is the one that’s right for you. Riders with mobility, flexibility and balance issues may benefit from the stable platforms found on trikes and recumbent bikes. Folding bikes fit well in smaller dwellings and bicycles with electric assistance can make hilly routes accessible. There are some cruiser-style bikes designed so riders can put their feet flat on the ground when stopped while still achieving full leg-extension when pedaling. Your local bike shop can help you find a bike to make sure physical limitations don’t limit you.

Get low. Step-through frames featuring lower top-tubes make mounting and dismounting easier for riders who aren’t as flexible as they once were. These bikes are sometimes given the misnomer of ?women’s frames,? but men and women alike can benefit from easier bike boarding.

Listen to your body. Forget how fast or far you could ride years ago, or even last week. What matters is how you feel today. Each year may bring changes in balance, bone-density, or muscle mass. So if you?re body is telling you to slow down or stop, heed its direction.