Rule of thumb: Every faded bike lane is asking to be a protected bike lane 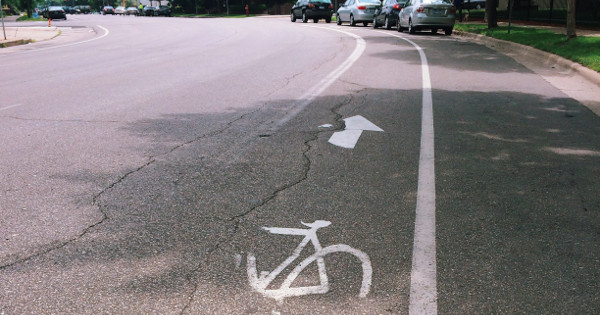 Photo by Scott Shaffer of Streets.mn.

Here’s another great insight from the Twin Cities on where to build protected lanes: most faded bike lanes become faded for a reason.

“The streets will speak to us, if we stop and listen,” Scott Shaffer of Streets.mn wrote this month. When a “torrent of car tires” removes the paint from a bike lane, “it weakens the belief that the pavement is dedicated to bicyclists. The street is saying, ‘Cars drive here. This is not a dedicated space for bikes.'”

Shaffer doesn’t explicitly mention the further implication of this phenomenon: the bike lane paint would still be there if cars weren’t regularly encroaching on the bike lane.

For whatever reason, these streets have been designed in such a way that people are regularly driving into the bike lane with their cars. To be clear, that doesn’t mean people are driving into bike lanes while bikes are present. But when it’s obvious to all users that cars are regularly cutting into a bike lane, how many people on bikes will choose to be present?

As any industrial designer could tell us, the persistent misuse of a device (such as a city street) is not the result of error by users. It’s the result of an error in the user interface.

Time to change the street.

The Green Lane Project is a PeopleForBikes program that helps U.S. cities build better bike lanes to create low-stress streets. You can follow us on Twitter or Facebook or sign up for our weekly news digest about protected bike lanes. Story tip? Write [email protected] You might also enjoy our recent post about choosing protected bike lanes based on the places where people are riding on the sidewalk.