Psst: The Dutch already figured out how to build bikeable suburbs 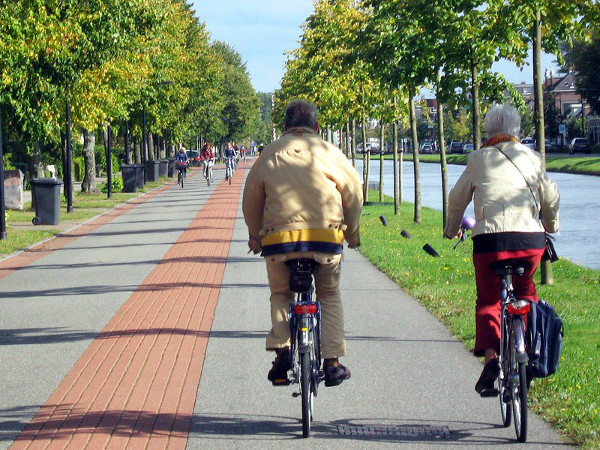 Riders in the Netherlands. Photo: Alternative Department for Transport.

First in a two-post series on Dutch suburbs.

People the in U.S. street design world — sometimes even people who write for this very website — regularly say that U.S. development patterns mean that Dutch street designs can’t be immediately adopted in the States.

That’s a lot less true than you probably think.

Of course some ideas can’t/won’t port over wholesale. But especially by European standards, the Netherlands is actually probably one of the most spatially similar places to much of the US. Guess where this is:

Count the fast food signs, the car lanes all leading up to a big freeway underpass. If not for the protected bike lane this could be Anywhere, North America. But this is actually in Amsterdam proper.

The reality is that only a minority of Dutch people live in the medieval centers of Amsterdam, Gouda and Utrecht. Though many tourists visiting Amsterdam for a couple days don’t typically see this, many Dutch people’s daily reality includes stuff much more like this:

That’s a big-box shopping center in the Netherlands. Unnecessarily oversized parking lot? Check! Yes, Kansas, the Netherlands also has parking minimums, and as in the States, sometimes they’re too high, wasteful of space, and promote driving. Again, if not for the protected bike lane, this could be Anywhere, North America. 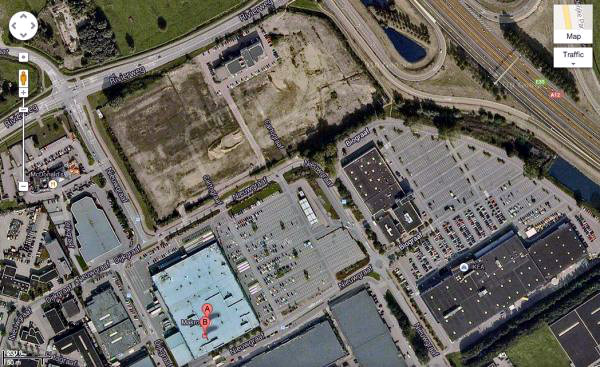 Lots of free (ie, non-tolled) freeways, room for parking and car-centric arterials. Yet again, this could be … well, you get it.

Even the older parts of Dutch cities follow rectilinear grids much more often than do their other European peers, in part due to the longstanding Dutch mentality of needing to conquer swampy nature and impose order on it. While roundabouts are becoming more common there in newly built-up areas, 4-way signalized intersections are numerically far more common overall.

A lesson for American suburbs: step by step, progress can happen 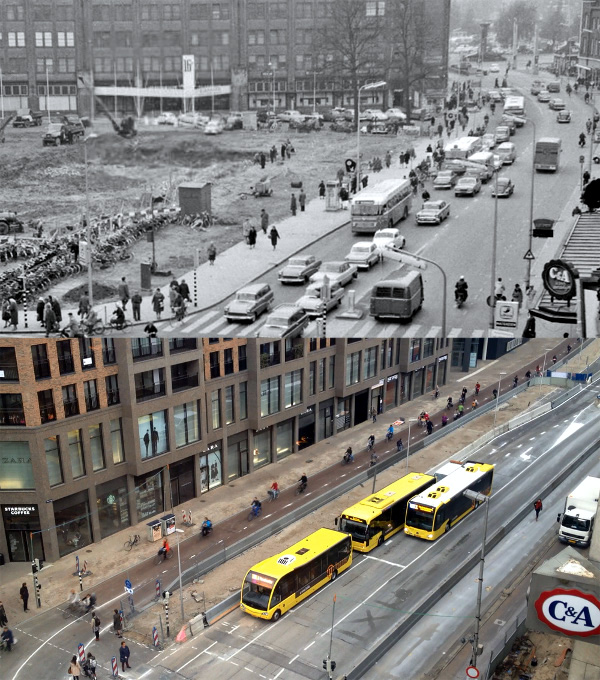 Comparison and lower photo by Mark Wagenbuur of Bicycle Dutch.

With a stop at one of its in-between states of evolution, in 1964: 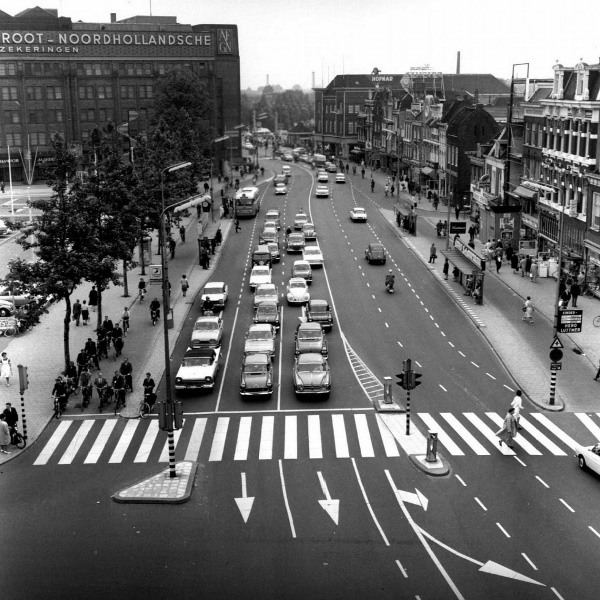 The 1961 version could be any North American car-centric arterial today. Notice how comparatively few bikes there are (the moribund biking culture of the Netherlands in the 50s and 70s due to car-first planning policies of the era is no joke), and how many more there are even in the ’64 update. Spatially, there’s nothing particularly exotic about the 60s version of that road compared to North American stretches today.

Instead, the obstacle omes down to political will and awareness of what could be. Which is why the more we can get people aware of the positive benefits of going from 1961 to 1964, the more buy-in there’ll be for even better stuff.

The spatial argument, by contrast, doesn’t factually hold up in many cases when you look at the bulk of Dutch infrastructure. When it comes to public messaging, protected bike lanes may need to be sold to Americans as Our Great New Idea, rather than That Exotic European Stuff. But there’s got to be some balance. We also need to show that Europe, admirable as its street design is, is actually not always that exotic.

Kirk Boydston is, among other things, a California-based bicycling advocate. This was adapted from a comment he wrote on Streetsblog USA.