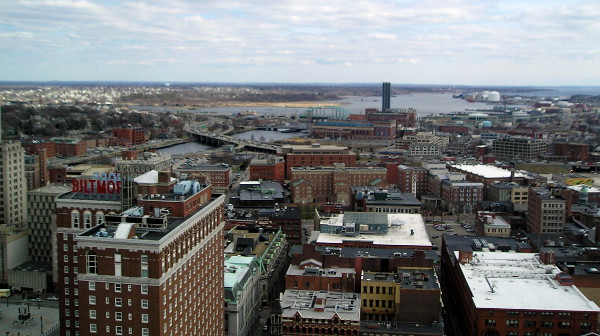 Providence’s Jewelry District before the I-195 removal. Photo: Runaway Jim.

Sixth in a series of profiles of the Big Jump Project’s 10 focus areas.

Fifty years ago, almost every city in the country discovered the effects a freeway has on the neighborhoods nearby.

Now, one of the country’s oldest cities is about to learn what happens when you move a freeway out.

The 2013 relocation of Interstate 195 near downtown Providence, Rhode Island, is just starting to pay off. The move reclaimed 16 city blocks for homes, parks and businesses just outside downtown and rejoined the downtown with the city’s historic jewelry district.

Across the piers that once held the freeway bridge, the city is building a new walking-biking bridge that’ll connect downtown with India Point Park, just across Providence Harbor. 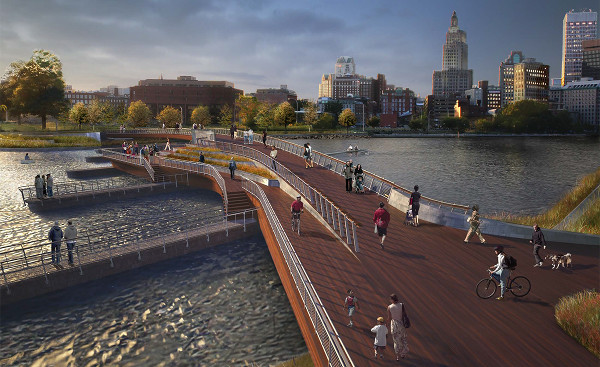 But the parent freeway, I-95, remains, separating downtown Providence from the city’s south side. In the next three years, Providence is planning a series of street investments that will connect the new bridge, the former freeway blocks and the neighborhoods that I-95 has cut off from downtown.

Between downtown and the massive Roger Williams Park (named for the city’s rebellious, abolitionist founder) are seven neighborhoods: 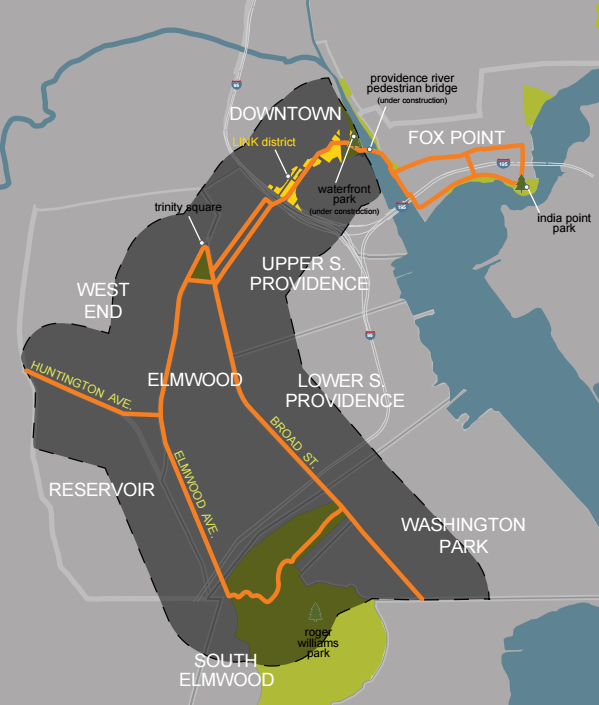 Built largely in the early 20th century, just before the collapse of Providence’s textile industry, today the district is 60 percent Latino. About 30 percent of residents identify as Black or African-American. Most streets are narrow, walkable and tree-lined — including Broad and Elmwood, onetime streetcar routes that are now the district’s two main arterials. They’re home to numerous local institutions.

“Broad is one of the most vibrant commercial corridors in the city,” said Martina Haggerty of the Providence Department of Planning and Development. “It’s very culturally diverse.”

For residents of both areas, especially the lower-income ones, the benefits of easy car-free connections across I-95, which still hems them in north and south, could be huge.

“These are the folks that would benefit the most from better walking infrastructure, better biking infrastructure, better transit service,” Haggerty said. “The idea is to make bicycling and walking safer and more comfortable and attractive to the residents of south Providence, along both Broad Street and Elmwood, and to be able to better connect those residents to opportunities, resources, other employment opportunities in downtown. — As well as two huge assets that we have, Roger Williams Park and India Point Park.”

Broad and Elmwood could both be ideal bikeways, if space on them can be found.

“The goal would be to get as close to that as possible,” Haggerty said. “There are a lot of traffic implications on both of those corridors as well, a lot of driveways on both.”

Whatever happens, the city is just beginning public conversations about it and expects lots of proposals and counterproposals.

The ultimate result will be part of “cityWALK,” a long-brewing vision to create a continuous link between the two parks, running through the new blocks opened up by the freeway relocation. 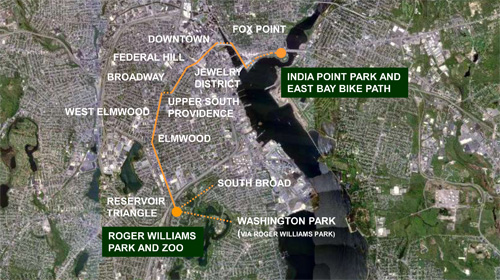 It’s an ambitious leap for a city with almost no bike lanes today.

In addition to the city’s interest in helping its residents connect to job opportunities and shopping, Haggerty said, Mayor Jorge Elorza has another interest in the potential of cityWALK and in Providence’s participation in the Big Jump Project: giving Providentians more ways to to have fun.

“Recreation is something that’s really important to him, especially for youth,” Haggerty said.

It might help that Elorza, 40, commutes to work on a mountain bike.

“He’s probably the kind of guy who would be out there in six inches of snow,” Haggerty said with a laugh. “He’s really into it.”