Portland is first U.S. city to make protection the default for all new bike lanes 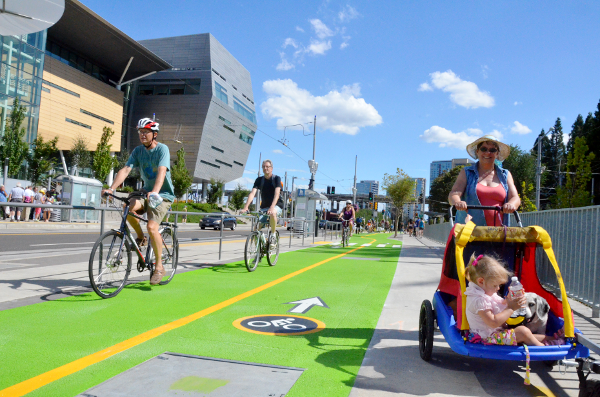 Sometimes, the most important question in the world is “why not?”

For decades, U.S. cities built roads around driving and (sometimes) walking. If people wanted to bike, they were left to decide among the sidewalk, the shoulder or the middle of the traffic lane.

Then, starting in 1967, a few cities tried striping bike lanes on the side of roads. In 1971 a Republican legislator in Jacksonville, Oregon who biked for exercise convinced his colleagues to require bike lanes on most road construction projects. The Bike Bill, as it was known, included exceptions; but unlike any other law in the country at the time, it required anyone proposing a project without bike facilities to explain why not.

Over the 45 years that followed, the “why not” requirement in Oregon’s Bike Bill has gradually created a state with by far the highest bike commuting rate in the nation: 2.6 percent statewide, higher than all but eight major U.S. cities.

Last fall, Oregon’s largest city created another new policy. Effective immediately, every time Portland road designers recommended a bike lane, they would need to make it a protected bike lane — or else explain why not.

It’s the first such policy we know of in the United States.

(Memphis has a similar standard for some streets but it allows either buffered or protected bike lanes.)

Our experience and our policies both tell us that encouraging more bicycle transportation is key to Portland’s efforts to address population growth, safety on our streets, health, climate change and prosperity. If we build our system well, then models tell us that over the next 20 years bicycle transportation is the means of transportation expected to grow the most. The key is to build our system well, to build it to be safe, and to strive for the highest quality bikeways possible.

There is a growing body of research and experience across the U.S., North America and the world demonstrating the effectiveness and desirability of protected bicycle lanes to encourage more bicycle transportation. It is also a key element of our Vision Zero strategy for people when riding bicycles. That is why I am asking our engineers, project managers and planners to make protected bicycle lanes the preferred design on roadways where separation is called for. I am asking for this design standard for retrofits of existing roadways as well as to new construction.

I know this will be challenging and not always achievable in the moment. In some cases we may not have sufficient funding; in other cases we may find the necessary trade-offs to be currently untenable. Nonetheless, I want protected bikeways to be considered on every project where some type of separation is desired. I am committed to providing staff the necessary support and training to address the inevitable design challenges. We have a lot of talent at PBOT; there is no transportation agency in the U.S. with more skill, knowledge, experience and focus. Let us direct that talent to creating a safer, healthier, more prosperous, sustainable, livable and mobile Portland.

A concept for a future 82nd Avenue in Portland, by Nick Falbo of neighborhood group Foster United.

In an interview Monday, Treat said this internal direction to her staff was just part of the initiative. The city is also preparing to consider a formal administrative rule that she said would require developers to provide protected bike lanes with new developments — much as they’ve long been required to provide sidewalks.

As with sidewalks, Treat’s team wants to create exceptions and alternatives to the rule (which isn’t finished and would require city council approval). On certain streets that aren’t expected to get continuous protected bike lanes soon, developers might instead be able to pay into a fund that could be used to build the bike network on other nearby streets.

Treat said the development policy is getting an early test on Southwest Bond Street, a newly built street being planned through a former shipyard.

Last spring, the city had tentatively approved a plan for door-zone conventional bike lanes on Bond. Under Treat’s new policy, property developers have changed course and are planning for protected bike lanes instead.

“They have been very positive in their feedback of ‘We understand why you want to do this and why it’s good for the city,'” Treat said. “We also are willing to invest a lot of staff resources on our side helping developers figure out how to incorporate bike lanes into their development, because we have some awesome traffic engineers.”

But in the end, it was up to city leaders like Treat to decide which challenges to ask those engineers to solve. And from now on in Portland, one of those assigned challenges will be protected bike lanes.

“I’m very, very interested in getting more people to adopt biking as their commute mode, as is the city,” Treat said. “One of the largest barriers that we have to getting more people on bicycles is getting people feeling safe, and cycle tracks are the safest facility.”