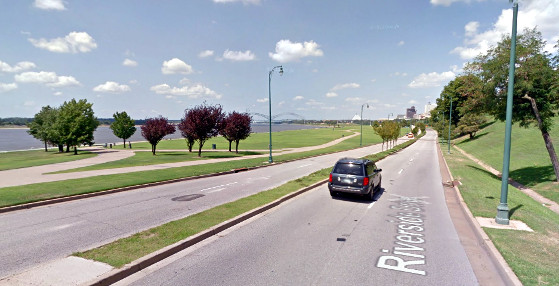 Adding a new chapter to the most interesting bicycling turnaround story in the country, Memphis is preparing to test the permanent conversion of half a scenic boulevard near its downtown into a pedestrian space and two-way bike path.

The west two lanes of Riverside Drive, a four-lane boulevard with a planted median along the Mississippi River bluffs, already closes to motor vehicles for three months each spring — April to June, the prime weather season in the Mississippi Delta — between Beale Street and Carolina Avenue. That’s to make room for the month-long Memphis in May International Festival.

But starting in July 2014, if Memphis Engineering Director John Cameron has his druthers, the spring season will simply continue indefinitely.

“We close it down for three months a year,” Cameron said, Memphis Bicycle and Pedestrian Coordinator Kyle Wagenschutz recounted in an interview Tuesday. “Why don’t we do that all year?” 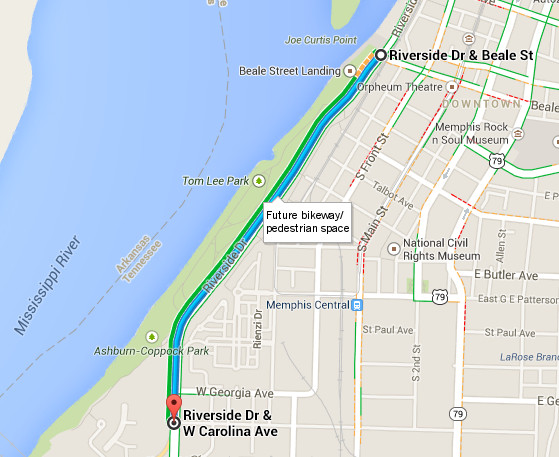 Wagenschutz announced the plan at the National Bike Summit in Washington D.C. Further public outreach is coming soon, he said.

The city hasn’t prepared sketches yet for the new street design, which Wagenschutz said will eventually include “programming” the pedestrian space in the new roadway “so it’s not just dead space.”

The plan comes as the city announces that it expects to blow past Mayor A.C. Wharton’s target to add 15 protected bike lane-miles to Memphis streets. (According to the city’s newly released State of Bicycling report, Memphis anticipates 22 miles by 2016.) By creating a dedicated space for bikes, the Riverside Drive work is likely to reduce conflicts with people using the riverside trail network on foot. It’ll also create a new direct, stress-free connection between downtown and the Harahan Bridge, which is adding a bike-pedestrian pathway that will connect Memphis’ spreading bike lane and path network with the one across the river in West Memphis, Ark.

“Basically it’s going to be circling downtown with a protected cycle track,” Wagenschutz said. “This was a big piece of it that was essentially missing.”

This year’s changes to Riverside Drive would technically be a pilot project, Wagenshutz said. But with the city itself as the only substantial landlord along the street, there are few intersection or parking conflicts to consider.

“The only adjacent land use is park land, is river bluff,” Wagenschutz said.

Restricting road space to human-powered traffic, something many cities (including Memphis) began doing in the 1970s, is seeing a resurgence, from Rome to New York City to Atlanta. And as Cameron points out, it’s already being done on Riverside Drive itself every spring. But as Cameron’s team continues to bring creative thinking about public spaces to new levels, it’s never been clearer that Memphis is a city that city-lovers everywhere should be watching.

The Green Lane Project is a PeopleForBikes program that helps U.S. cities build better bike lanes to create low-stress streets. You can follow us on Twitter or Facebook or sign up for our weekly news digest about protected bike lanes. Story tip? Write [email protected] Correction: an earlier version of this post incorrectly described the number of lanes affected by the closure.