Memphis built its first traditional on-street bike lane in the fall of 2008.  Just four years later, the city is finalizing plans to build and fund its first protected bike lanes along Tillman Street and Broad Avenue.  This dramatic shift in the city’s focus was driven largely by the efforts of Memphians – business leaders and citizen advocates with the vision and courage to work together to build a better city, one street at a time.

Creating the Missing Link
The idea for a protected bike lane, or Green Lane, along Broad and Tillman grew from the need to build a missing link.  On its eastern end, The Shelby Farms Greenline connects to the majestic 4,500 acre Shelby Farms Park.  On the western end, Livable Memphis program coordinator Sarah Newstok saw an opportunity.  “The greenline attracts such a diverse group of riders,” Newstok said in December of last year.  “We wanted to get those riders all the way to Overton Park on the western side.” 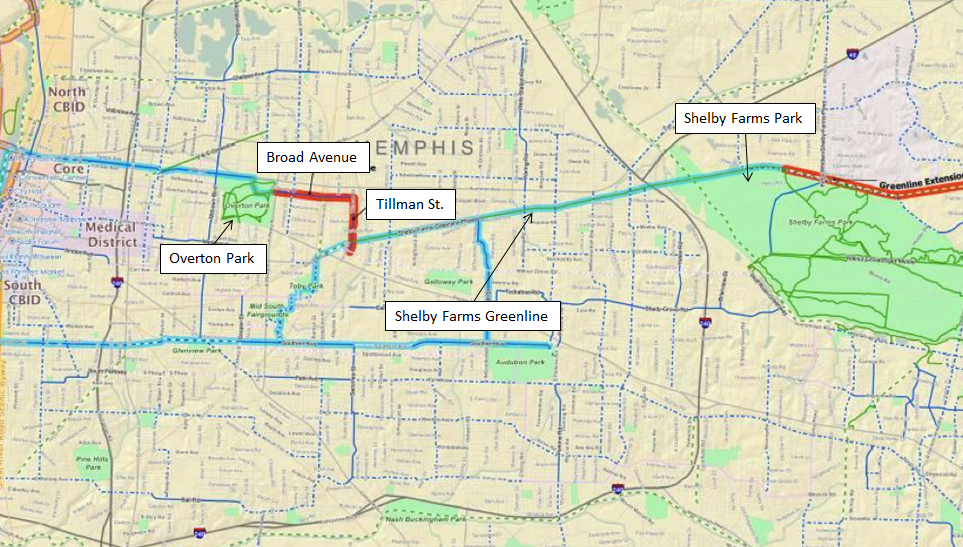 Overton Park has been described as Midtown Memphis’ “crown jewel.”  The 342-acre urban-park features more than 150 acres of old growth forest, a natural area with “330 flowering plant species from 85 plant families, including 11 species of oak trees, eight species of grapevines and a wide variety of native wildflowers.”  The park, designed by George E. Kessler in 1901, was preserved as a Tennessee state natural area in May of 2011.

The Green Lane project along Broad Avenue and Tillman became an effort to connect the parks.  It became the missing link connecting Overton Park to Shelby Farms Park along a safe, protected path.

But for many business owners along Broad Avenue, linking two of Memphis’ signature parks using a Green Lane was an important strategy in an ongoing neighborhood revitalization process.  As Broad Avenue Arts District president David Brown explains, “we continue to see this bike connector project as one of the most important steps in our renaissance as a vibrant neighborhood, business district and art colony on the eastern edge of Midtown.”

The Citizen Spark – A New Face for an Old Broad
The idea to build the connector emerged from a partnership between advocates for livable communities and business owners on Broad Avenue, a working relationship between Livable Memphis and the Broad Avenue Business Assocation that led citizens to complete a Memphis street.

After a series of design meetings, advocates and business owners agreed on a street design for Broad Avenue that would include protected bike lanes, artistic crosswalks, and planted medians.   They also agreed to re-configure and re-paint the street themselves.

Described as “guerilla” urban renewal by some observers, the new street design became the centerpiece of a daylong block party called “New Face for an Old Broad.”  Inspired by the Open Streets initiatives in Chicago and Minneapolis, the New Face for an Old Broad event combined the spirit of the Ciclovia made popular in Bogota, Colombia with citizen driven neighborhood revitalization. The day-long celebration of Broad Avenue’s complete street attracted more than 10,000 people to the growing business district and cemented a partnership between business leaders advocates that would serve as the foundation for planning and building the Green Lane along Broad and Tillman.

A Neighborhood with a Story
The New Face for an Old Broad Celebration was one among many strategies contributing to the economic resurgence of Broad Avenue – an old neighborhood with an important story.

In the mid-1950s, just one block to the south of Broad, plans for the construction of Interstate-40 significantly changed the character of the neighborhood.  The Federal Highway Administration planned to run the interstate adjacent to Broad Avenue – directly through nearby Overton Park – but the highway project was challenged and ultimately halted when a neighborhood group, Citizens to Protect Overton Park (CPOP),  took their case to the United States Supreme Court.  Citing the environmental damage the highway would have on the forest, the U.S. Supreme Court ruled unanimously in 1971 to protect the park.  Though interstate traffic now stops at the doorstep of Overton Park, re-routing people and traffic away from Broad Avenue and onto Sam Cooper Boulveard one block south significantly impacted the character of the previously thriving Broad Avenue business district.

Building a Better City – One Block at a Time
In Memphis, citizens continue to lead the efforts to protect and improve their neighborhoods, supported by Memphis Mayor A C Wharton.  As Mayor of Shelby County, Mayor Wharton brokered an agreement to protect Shelby Farms Park and led the effort to build the Shelby Farms Greenline.  Tommy Pacello, a member of Mayor Wharton’s Innovation Delivery Team, praised the New Face for an Old Broad Event as an example of the kind of “tactical, small-scale, high-return strategy” that might revitalize other Memphis neighborhoods.

The resurgence of Broad Avenue continues in high gear.  According to the Broad Avenue Historic Business Association, since 2006 nineteen new businesses have made their home on Broad.  40,000 people have visited the street at events like the New Face for an Old Broad celebration, 29 properties have been rehabilitated or constructed, and the street has welcomed six public art installations.

The Green Lane Project along Broad and Tillman, officially called the Overton Broad Connector, is the next chapter in this story of citizen-led neighborhood revitalization.  Through the dedicated efforts of business owners and advocates, and in partnership with City Engineer John Cameron and Mayor Wharton, in less than four years the City of Memphis has moved from building its first mile of basic bike infrastructure to designing and constructing the first two-way protected bike lane of its kind in the United States.  Follow the Green Lane Blog in the coming weeks to see draft designs of Memphis’ signature Green Lane Project: the Overton Broad Connector.