In Austin, a bus-bike alliance pays off 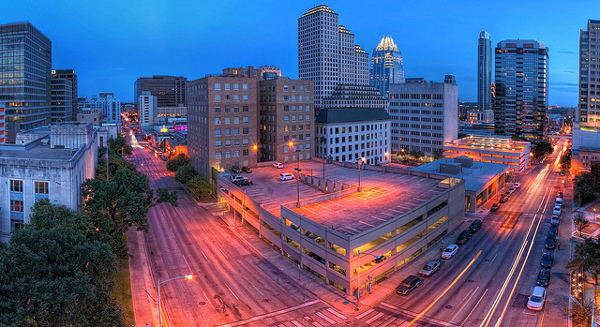 Austin has just done the impossible: it’s replaced 9 percent of the city’s downtown on-street auto parking with a buffered bike lane without howls of protest.

The trick: bike and transit advocates teamed up.

For years, Austin’s Guadalupe and Lavaca streets have been Texas-sized thoroughfares through the central city: four auto lanes in each direction, plus hundreds of metered parking spaces on both sides of each street and sharrows that supposedly welcomed bikes to the rightmost and leftmost lanes.

It made for a bike route that few actually wanted to ride — and a wide channel for auto traffic that somehow didn’t seem to alleviate peak-hour congestion elsewhere in the city.

When Capital Metro, Austin’s transit agency, lined up a long-awaited plan to put dedicated bus lanes on Guadalupe and Lavaca, bike planners at the city saw something else: a chance to use Austin’s political support for good transit to mend a broken link in the city’s bike network.

Transit planners, meanwhile, saw a valuable ally for one of their own goals: removing the lane of paid auto parking that ran between the dedicated bus lane and the sidewalk, blocking bus loadings and slowing transit travel times in each direction.

The result is under construction now: not only are two 11-foot traffic lanes turning into the first dedicated bus lanes in central Texas, but the 8-foot parking lanes will be two of the state’s most useful buffered bike lanes.

‘The real estate we needed’ 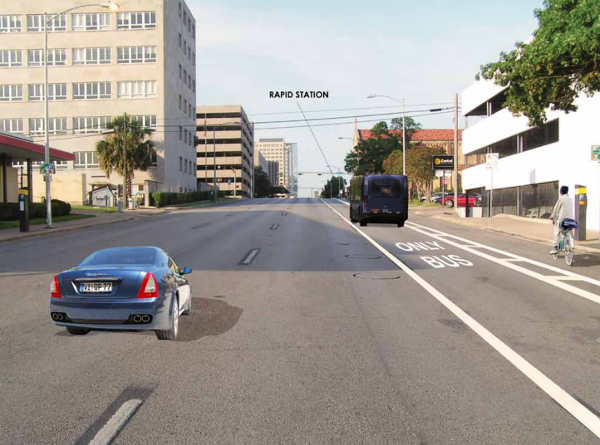 “It’s through the heart of the city,” said Chad Crager, acting bicycle program manager for the City of Austin. “Removing the parking gave us the real estate we needed.”

Though the 1.25-mile project removed 267 auto parking spaces on Guadalupe and Lavaca, the city says all but 94 will be replaced eventually by new angle parking planned on side streets.

Todd Hemingson of Capital Metro said his team felt the auto parking had to go for the sake of the bus project, but didn’t want it to go to waste, either.

“The parking space would be essentially empty, and we knew that wouldn’t sit well with the constituents and property owners,” Hemingson said. “The biking community is very vocal and great advocates for their cause, and so when we can align transit interest and bike interest, all the better.”

“Whenever something else can be a catalyst besides bicycles, it certainly helps us with the public,” he said. “We didn’t have to go around downtown and tell people that we were removing all this parking on main roadways for bikes.”

The new route links the city’s new protected bike lanes on Guadalupe near the University of Austin with the protected lane on Barton Springs Road, south of the Colorado River,

“Wherever we can create north-south connectivity, that’s a very big thing for Austin,” Crager said.

Though the the design is a significant improvement over sharrows, it doesn’t offer the continuous, physically protected bike facilities that are proven to make biking truly mainstream.

“There will be pinch points where the curb line is extended to allow for the bus stop to be created,” he said. “The bikes are going to have to go into the bus lane to go around the bus stop, and then go back in the bike lane.”

CapMetro’s safety and operations staff was hesitant to allow that mixing. But the city pointed out that from a biker’s perspective, mixing only with professional bus drivers was actually a huge improvement.

“We told them, ‘Hey, this is no different than most bike lanes in Austin where the bus essentially merges over the bike lane,'” Crager said. “Yeah, you have 60 buses an hour, but that’s nothing compared to the number of vehicles that you have next to bike lanes.”

“We realize no one’s going to get everything they want.” he said. “But I think we ended up with a solution that allowed us to get something we’ve desperately sought for years.”