It’s exciting to watch, from across the ocean, as Open Streets events spread so rapidly across the United States. Giving people the chance to cycle on streets without cars can be a powerful experience that leaves them wanting more.

I ought to know: I’m Dutch, and that’s exactly what we did 40 years ago ? though for a somewhat different reason — just as we began building our modern bike infrastructure.

From November 1973 to January 1974, the Dutch national government prohibited the use of private motor vehicles on Sundays. This policy was meant to prepare the public for the scarcity of oil predicted ahead. The Netherlands, like the United States, was boycotted at this time by the Organization of Petroleum Exporting Countries.

No cars on Sundays meant children could roller-skate down the center of normally congested streets and adults had reason to dust off old bikes. This reclamation of public space happened at a critical time. The 1970s — perhaps like the early 21st century America — was the decade when transportation policy shifted to favor more sustainable modes.

The Dutch had adapted rapidly to mass motorization in the mid-twentieth century. By the 1970s, the negative effects associated with having more cars on the roads were prompting reaction from the public and from the government. White bikes, often considered the original model for bike sharing, appeared on the streets of Amsterdam. Large-scale bike protests were also held as the capital grappled with congestion and discussed filling in historic canals to build more roads. A national lobby group called Stop Kindermoord (Stop Child Murder) was working with lawmakers to pass measures meant to address the high number of fatal collisions between children and cars. Traffic engineers in the City of Delft began implementing ?woonerfs? (home zones) on neighborhood streets to slow cars and make space accessible to vulnerable users, such as senior and disabled citizens and children. 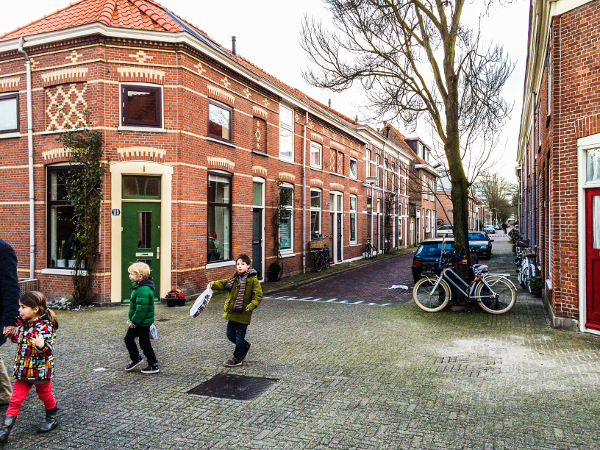 The original woonerf, a street where “cars are guests,” in Delft, Netherlands. Photo courtesy mobycon.nl.

It worked. At the national level, the oil crisis gave the government a reason to begin taking sustainable mobility seriously. The policies adopted during this time resulted in infrastructure changes in the 1980s. Today, more than a quarter of daily trips are made by bike and conditions are safe enough that almost half (49 percent) of all children cycle to primary school.

The car-free Sundays of 40 years ago gave people the chance to play in space they had been conditioned to view as off-limits. These events were ephemeral but they happened at a critical time. Take heart, planners and advocates: giving people the chance to experience the pleasant pace, sociability and joy of riding a bike can also cause them to re-examine their notions about cycling, about the streets themselves.

Angela van der Kloof is a Dutch sustainable mobility consultant with more than 20 years experience working in The Netherlands and in Europe. She has taught bicycle-planning workshops across Canada and is well known as an international speaker. Her special area of expertise is supporting women to use the bike in public space as a tool for social integration.

The Green Lane Project is a PeopleForBikes program that helps U.S. cities build better bike lanes to create low-stress streets. You can follow us on Twitter or Facebook or sign up for our weekly news digest about protected bike lanes.