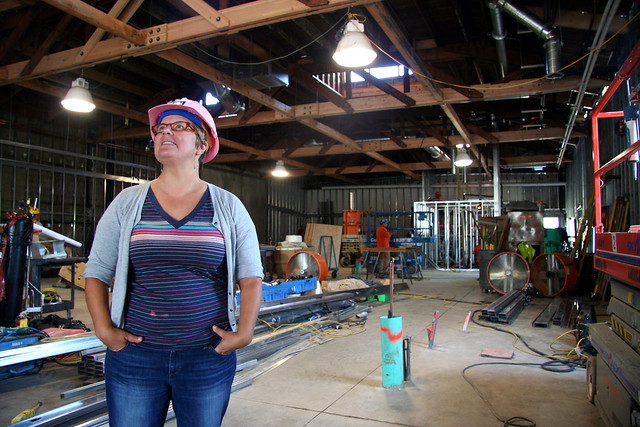 Lisa Sedlar, CEO of Green Zebra Grocery, inside her first location in August.

After nine years as a director of purchasing for Whole Foods Market and eight as CEO of regional grocer New Seasons, Lisa Sedlar watched her cities’ plumbest areas fill with retailers jostling to meet the country’s growing demand for fresh and local meat and produce.

But she also saw another trend: many shoppers seemed to be shifting back to the habits of their grandparents and — if they could afford it — choosing to live near grocers so they could make small daily trips by foot or bike instead of big weekly ones by car.

So, after 10 years of thinking, Sedlar jumped. Next week, she launches the first location of Green Zebra, a 7,000-square-foot mini-grocer that includes a cook-from-scratch kitchen, fresh-cut meat, a massive salad bar, grab-and-go sandwiches and beer and wine on tap. 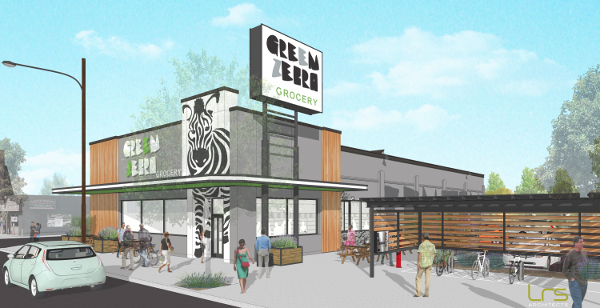 “The idea is that it’s not food for ‘those people,'” Sedlar said. “it’s food for everyone. The idea of these stores is that it’s the new normal.”

If neighborhood shopping districts can ever become common again in the United States, they’ll depend on businesses like this one. But the model can only succeed in bringing fresh food to new areas, Sedlar figures, if at least 30 percent of customers come in by foot, bike or public transit.

That’s why Sedlar’s first location has more on-site bike parking spaces (20) than car spaces (17). It’s also why she’s joined a group pushing to remove a lane of auto traffic on the road that goes past her shop, Lombard Street, to make room for a wide or protected bike lane, plus green bike boxes and better pedestrian crossings.

“It’s never not going to be a main thoroughway,” Sedlar said. “I would totally take away a travel lane. That’s what makes the most sense.”

Sedlar has bet her livelihood on her conviction that if it’s easy, convenient and comfortable to reach fresh food in your neighborhood, you’ll buy it. Now she’s hoping her city and state will back that vision up by redesigning their streets for the 20-minute neighborhoods everyone says they support.

“What’s interesting to me about that is that this is the way we used to shop,” Sedlar said. “It’s similar to how agriculture has changed: we’ve gone from these big mono-agriculture farms to small family farms again, and we’ve gone from really big giant conventional hypermarkets to little small neighborhood stores again. It just feels like that’s the way it’s meant to be.”

This post is part of a collaboration between the Green Lane Project and the Alliance for Biking and Walking to document the ways better bike lanes are building prosperity around the United States. For more excerpts and the full report later this month, you can follow us on Twitter or Facebook sign up for weekly emails of our latest news here.