Few concepts are more important to modern street design than “traffic calming” — or, to use plainer language, “slowing down cars by putting large objects in the street.”

But large objects (like flowerpots, pedestrian refuges, speed bumps or concrete domes) cost money. And if you want them both permanent and attractive, that’s even pricier.

This is why on-street storm drainage can be a great deal for taxpayers and biking boosters alike.

Slicing holes in the pavement and planting grass in them isn’t cheap, either. But in cities that get large bursts of rain, they’re useful at preventing flooding and water pollution, and far cheaper than laying new pipes to carry stormwater away. So if your city’s transportation department and its stormwater management department were to team up to put storm drainage in just the right places, it could be a very cost-efficient way to manage runoff while creating permanent, attractive separation between bike and car traffic.

A small storm drainage area can also create an excellent traffic diverter, reducing auto traffic on a bike-friendly side street. 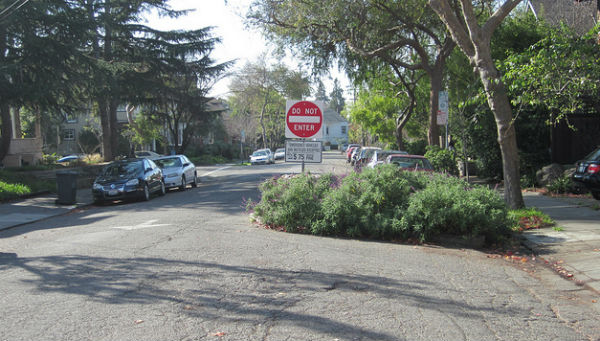 All of this is why it’s nice to see the National Association of City Transportation Officials publishing an Urban Street Stormwater Guide, out next month:

Coming in June 2017, the Urban Street Stormwater Guide is a first-of-its-kind collaboration between city transportation, public works, and water departments to advance the discussion about how to design and construct sustainable streets. The Urban Street Stormwater Guide provides cities with national best practices for sustainable stormwater management in the public right-of-way.

NACTO has been a major force in advancing common-sense bike infrastructure. Hopefully it can help do the same with stormwater management, to everyone’s benefit.