Thank you for your recent letter concerning bicycle safety and bicycle lanes. Let me at the outset express the hope that you mother will have a complete recovery from her accident in September while riding a bicycle in West Islip.

I have lived in West Islip most of my life and my personal feeling is that no one who lives in our hamlet or for that matter in Suffolk County should ever ride a bicycle or a motorcycle. I cannot tell you how many constituents over the years have told me that they are taking up bicycling for pleasure and exercise. I have told them not to do so but they usually do not listen ? 90 percent of those people eventually were hit by an automobile many like your mother with serious physical injuries.

I have heard the suggestion of bicycle lanes and additional signage but unfortunately this would do little to solve the problem. Suffolk County is a suburban automobile community?drivers expect to see other drivers on the road not bicyclists and motorcyclists. Even in those areas outside of Suffolk County where a portion of the road is for bicyclists?they still get hit by motorists. Signage has limited effects?there are currently 135 signs between Montauk Highway and Sunrise Highway on Higbie Lane and Udall Road?most of them are ignored by drivers.

Reality at a time can be difficult for some to come to grips with but giving false hope would be inappropriate.

Click here to send a letter to Legislator Barraga letting him know that his anti-bike perspective is not acceptable. 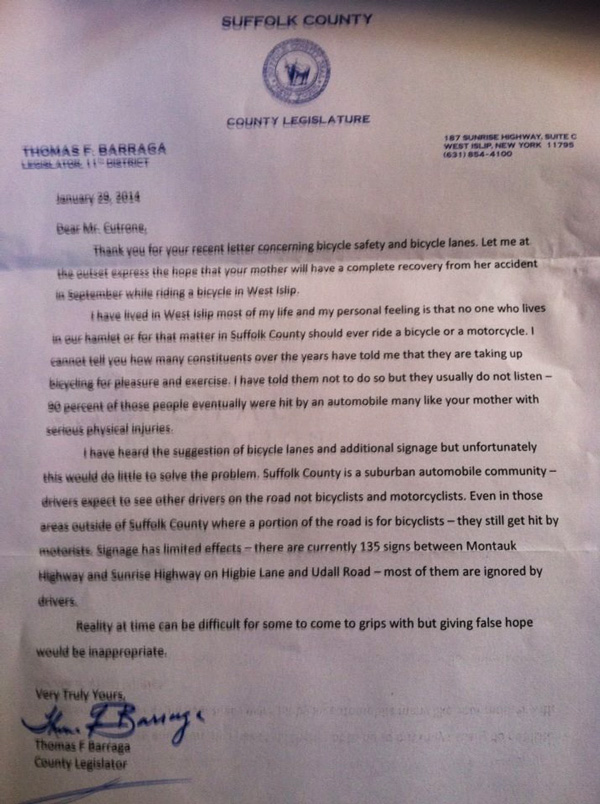 *An earlier version of this blog was published with editorial comments within the letter. We removed them because they were kind of mean. Sorry, we were hangry.