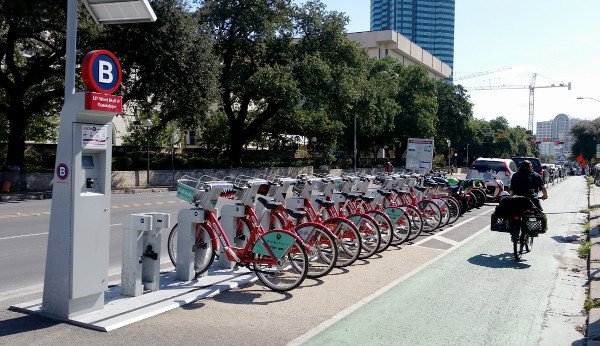 A report out today from the National Association of City Transportation Officials argues that making bike share relevant to more people of color will require, among other things, safe bikeways in more places where people of color live. 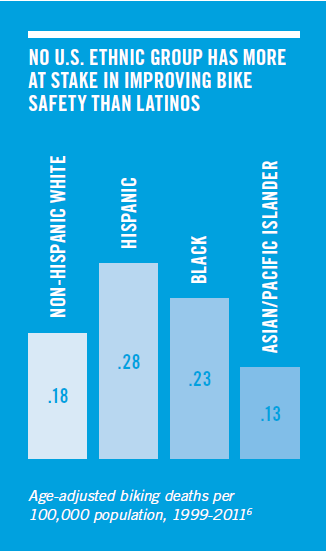 As the country looks for ways to broaden bike share access, NACTO’s report argues, part of the solution should be to make bike infrastructure common throughout cities rather than a scarce amenity.

The connection between bike share ridership and high-quality bike lanes is clear: people ride more when they have safe places to ride. Less explored is the positive feedback loop between bike share, the creation of protected bike networks, and overall cyclist safety. …

As previous research has documented, the risk of a cyclist being struck by a motorist declines as the number of cyclists on the road increases. Put in simplest terms, a driver who sees 20 cyclists over the course of a few minutes is less likely to forget to look for cyclists than a driver who sees just one. 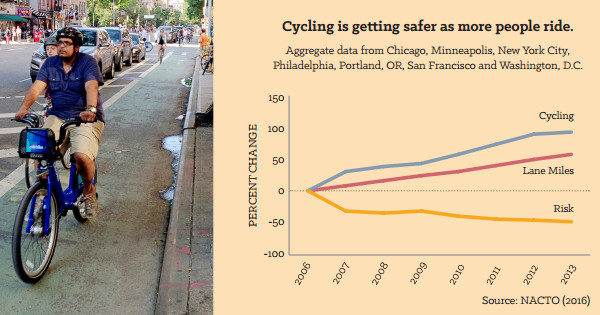 Here’s what’s happening in the above chart: The red line (infrastructure) drives the blue line (ridership) up, which drives the yellow line (risk) down. At least, that’s what the evidence suggests. Here’s a nice visualization from the report showing how protected bike lanes target and woo the people (of every background) who are on the fence about biking: 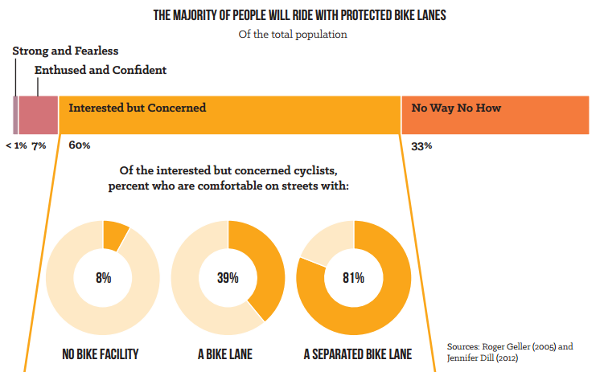 This positive feedback loop — infrastructure to ridership to safety to more ridership to more safety — shows up in cities that built protected bike lane networks and then launched bike sharing systems.

Chicago and New York — like Paris and Montreal before them — began to develop a protected bike lane network years before launching a large bike-share system and subsequently have seen high and sustained bike share use from day one, as users immediately found safe places to ride. Riders in these cities have seen their risk of death or injury from motor vehicles decline steeply.

The argument here is not that bike infrastructure will solve the country’s racial or ethnic inequities in bike sharing or in anything else. At best, better biking is an ingredient for transportation equity, not a recipe. Other work is badly needed too. That’s why the Better Bike Share Partnership, which funded this NACTO report, has been working on many aspects of this problem. (PeopleForBikes is a partner too.)

Almost all Americans would agree that everyone on city streets deserves safety. But we need to recognize that, like so many things, our safety on the street is unjustly influenced by the circumstances of our birth.