Chicago toasts a shift in the real estate that shapes cities most: streets 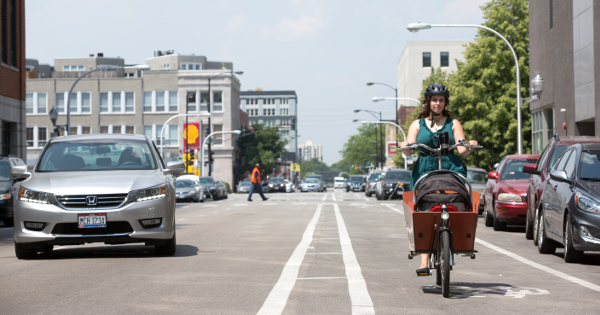 Compared to 100 miles of almost anything else a city can build, 100 miles of buffered and protected bike lanes costs practically nothing to install.

But when you look beyond the budget line items and start to consider what it means to transfer access to part of a city’s most valuable asset — physical space — a few stripes painted onto previously car-dominated streets can represent a massive investment.

When it’s wide and comfortable, a buffered bike lane is a big improvement over a conventional bike lane that also opens the door to further change in the future: adding the physical protection, such as curbs or posts or parked cars, that is required to make biking relevant to a much larger share of the population.

If you were to think about the 103 miles of buffered and protected bike lanes Chicago has installed since 2011 as real estate with an average price of $80 per square foot, it’d come out to something like a $300 million investment in an efficient, healthy, equitable transportation system based on the land alone.

Of course, that’s an “investment” that has cost taxpayers almost nothing while significantly improving transportation options on Chicago’s streets.

“Investing in bike lanes is essential to growing Chicago’s economy and improving our quality of life,” Emanuel said Friday, Streetsblog Chicago reported. “We have made tremendous progress toward expanding our bicycle network for all Chicagoans, and we will continue to work towards making Chicago the most bike-friendly city in America.”

The Active Transportation Alliance, the Chicago transportation advocacy group that first pitched candidate Emanuel on a plege to build 100 miles of protected bike lanes by 2015, accompanied the mayor’s announcement Friday with an updated vision of its own.

…but also its carefully selected set of… 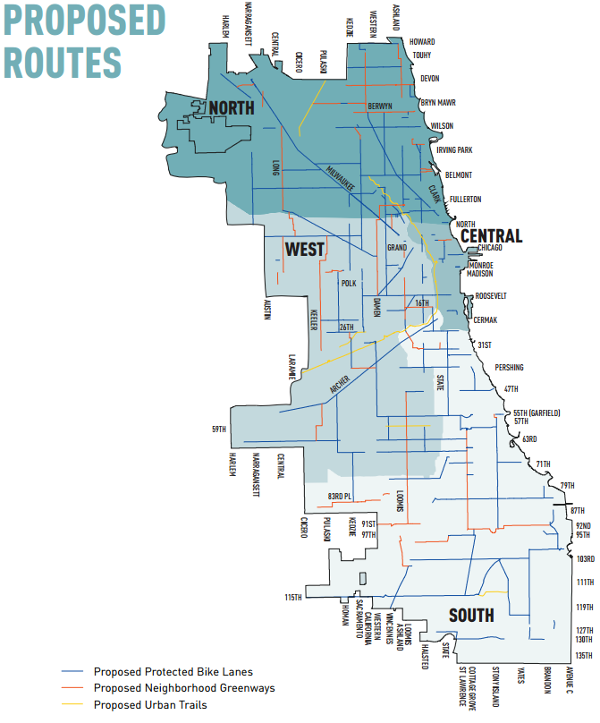 …and finally a full connected network that’d be required for Chicago to achieve its huge potential as a biking city. 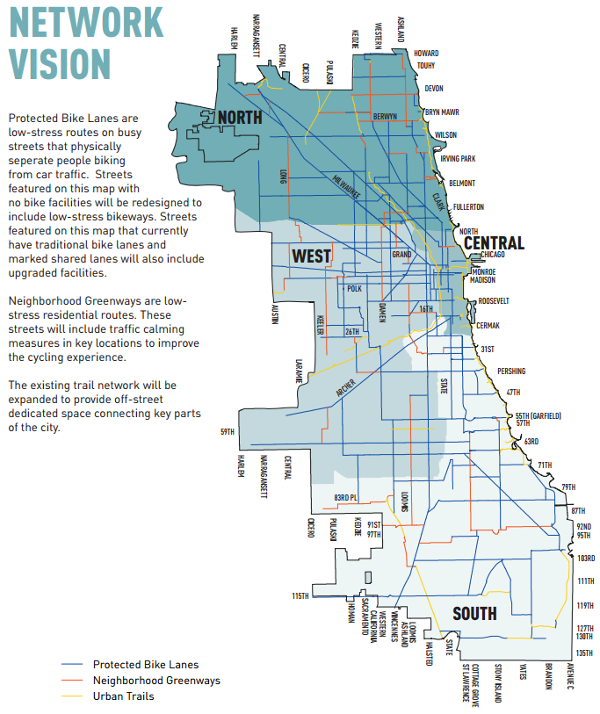 The second of the three maps above is essentially a prioritization of the most important routes in Chicago’s official Streets for Cycling 2020 plan. To better hone that list, Active Trans convened “a diverse cross section of neighborhood leaders, community based organizations, bicycle advocates and transportation professionals” to weigh the costs and benefits of different bikeways. Then the group circulated an online poll that got 700 participants to “rank the relative importance of various factors” such as network connectivity, safety and access to major destinations like parks.

“Based on these results, we were able to take some of the factors, and using geo-spatial software, develop a ‘score’ for the routes in Streets for Cycling 2020 plan that have not yet been built,” Active Trans writes in its report on the Bikeways for All plan. “This analysis yielded an initial map, which was then fine-tuned and revised by Active Trans staff and our working group of community members, before being published.”

A recent analysis of the city’s Streets for Cycling 2020 plan found that if built, the plan will help correct the disproportionate number of largely Latino and black neighborhoods that are underserved by bikeways. As the Bikeways for All report shows, lack of access to comfortable biking is a citywide problem:

But Chicago’s rapid improvements in its bikeway network over the last few years has delivered encouraging results: