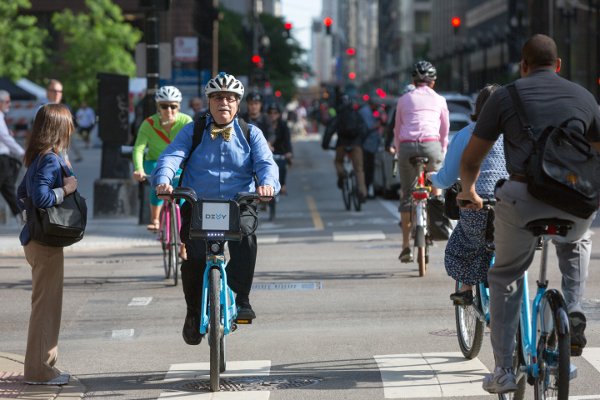 The protected bike lanes on Dearborn Street in Chicago are a huge success by just about any measure.

Bike traffic on the street rose 171 percent within a year of installation; a fifth of those riders said they had switched to bikes from some other mode. Stoplight compliance by people biking jumped from 31 to 81 percent. Most importantly, Dearborn became a crucial link in the city’s first connected network of low-stress bike lanes into downtown &em; a change that has almost certainly helped Chicago add 2,000 new bike commuters from 2012 to 2014, reaching its highest bike-commute rate on record.

All of that explains why we rated Dearborn as the best new bike lane of 2013. But what most people didn’t know, until now, was the extraordinary back story. The project was nearly derailed, despite basic sign-off by state traffic engineers, by orders from the office of former Illinois Gov. Pat Quinn.

At the eleventh hour, we learned that the Illinois DOT, which had jurisdiction over a few of the east-west streets that crossed the Dearborn bike lane, was going to flex its political muscle. A year before, we had planned on running a protected bike lane from the west side of Chicago all the way through the Loop, and the state traffic engineers had balked because “they had jurisdiction” and “this was unproven.” This was really code for “we are not going to let you do it” just because. … There were bigger political and personality issues and tensions at hand between the city and state. The governor’s office didn’t want me or the city dictating policy to them, or making the state look “old school in the face of change.” The Illinois DOT, because of many overtures at the engineers’ level, was actually on board with our bike and safety projects at this point and supported our overall approach.

We sent a note to our friends at the state, knowing that they were ruffling our feathers at the behest of the governor’s office for political reasons, rather than disagreeing with the decision based on any sound engineering or planning basis. We notified them respectfully that we were charging ahead with the project, the reasons why we were justified, and that they were invited to the press event to unveil the project if they so chose. We came from a strong position, and did not back down. Basically, we were saying, “Go ahead and sue us.”

The state, as I predicted, stayed quiet as the facility went in. As the bike lane became real, and people started riding in it before it was even open, we heard no complaints, save one hotel that needed some adjustments made to a loading zone.

Not included here is the happy ending: two years later, the Illinois DOT has built a protected bike lane of its own on Clybourn Avenue. They built it in collaboration with ” guess who? ” the Chicago DOT.

Political arguments are normal and healthy. But when they get in the way of good policy, the only thing to do is fight a little fire with fire.