After a lull earlier this fall, the Chicago Department of Transportation (CDOT) is moving full speed 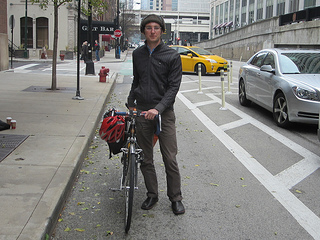 ahead expanding the city’s bikeway network. Mayor Rahm Emanuel has committed to building 150 miles of green lanes (110 miles protected and 40 miles buffered) by 2015. Earlier this year CDOT bikeway project director Mike Amsden told me he hoped to reach a total of thirty miles of green lanes before construction season ends this year.

The department recently striped several new stretches of buffered lanes on Chicago’s North, South and West sides. Crews are currently finishing a 1.3-mile section of protected lanes on 31st Street, as well as a continuous 3.5-mile network of protected lanes along the city’s historic boulevard system. Another ten miles of green lanes are still on the table for this fall, including a ?game-changing? two-way protected lane on Dearborn Street through the heart of downtown. With the current flurry of activity it’s very possible CDOT will win its race against time.

Lee Crandell, director of campaigns with the Active Transportation Alliance advocacy group, has been keeping close tabs on CDOT’s progress. He oversees Active Trans? Neighborhood Bikeways Campaign, which is rallying Chicagoans across the city to support the city’s green lane efforts. Lee also updates the Chicago Bikeways Tracker with a running tally of the total miles of protected and buffered lanes and an interactive map of the new facilities.

Yesterday morning, groggy for staying up late watching Obama’s acceptance speech the night before, we met over coffee to discuss the likelihood the city will hit its thirty-mile target before it’s too cold to stripe the lanes with thermoplastic. We also talked about Active Trans? key role in helping CDOT reach that goal.

What’s going on with green lanes in Chicago right now? There was a pause in construction for a while. Can you tell me what’s been installed recently?

By our count we are at about 22 miles of green lanes total, including about 10.5 miles of protected bike lanes and roughly 11.5 miles of buffered lanes. So some of the more recent projects that have gone in have been buffered bike lanes on Clark Street [a one-mile stretch between Addison and Diversey streets] and Halsted Street [a half-mile section from North Avenue to Division Street], as well as the protected lanes on 31st.

From your perspective, what’s the most exciting thing about this era that we’re going through right now with bikeways improvements in Chicago?

In the past year and a half we?ve seen a lot of firsts here with the first protected bike lane and the first 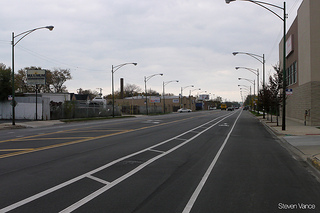 buffered bike lane, and we?ve even gone beyond that and have kind of become a national leader in putting in green lanes. So it’s really exciting to see how quickly we’re making progress here. The pace of change is exciting and that it’s making people safer and getting people out biking.

Do we have the most miles of protected bike lanes at this point?

I believe New York is still ahead of us but we are rapidly catching up.

Mike Amsden said CDOT wants to get to thirty miles of green lanes this year. Do you think that’s going to happen?

Yes, I think we?ll get past thirty miles this year.

How about the two-way protected lane on Dearborn? Everybody’s looking forward to that. What’s your prediction?

Now you and I love green lanes but they can be pretty controversial. There was a whole firestorm in New York about them recently. And we?ve seen a handful of negative articles from guys like [Chicago newspaper columnists] John Kass, John McCarron and Mark Konkol. And I?ve seen some negative comments about green lanes posted on our [daily transportation] blog Grid Chicago. What’s Active Trans? role in ensuring that the city’s able to move forward with their plans?

There’s been some bit of negative reaction, but overall I?ve been surprised by how positive the reaction has been. I think the reaction has mostly reinforced the idea that all kinds of people want safer streets in Chicago, and they want safer streets for other people as well. Even people who are primarily driving around the city, I?ve heard from them expressing interest in making streets safer for everybody, including people who are biking, because it makes them more comfortable when they’re driving down the street to know that there’s less potential for them to harm somebody.

Our role has been in reaching out to community organizations and alderman, and to rally our supporters

around the city to speak up and make sure that their neighbors and their aldermen know that people want safer streets and they want better bikeways in their neighborhoods. We?ve done a lot of presentations to community organizations. We?ve met with a lot of aldermen. Twelve aldermen in Chicago have signed on as our partners in support of a hundred miles of protected bike lanes, so it’s been really exciting to see that kind of support.

People have signed up at ActiveTrans.org/bikeways in support of a hundred miles of protected bike lanes, and we will continue to have opportunities like the petition in support of the Dearborn bike lane. While some times there may be a vocal minority that’s opposed to this we think overwhelmingly people want safer streets.

Anything else I should know about Active Trans? role in helping to implement these green lanes?

While we?ve seen a lot of support from Chicago aldermen, even supportive aldermen need to be listening to what their communities say. So we always encourage people to contact their aldermen and let them know they support better conditions for biking in their neighborhood. And if they like what their alderman is doing, positive reinforcement and thank you’s really go a long way.

Now, I?ve heard some people say they?d really like to see permanent concrete infrastructure. The flexible posts are nice but they?d like to see something that would actually protect them and their children from cars swerving into the bike lane. Where do you guys stand on that issue? Is that something that you guys are lobbying for, to see permanent infrastructure, aside from the lines of parked cars to the left of the bike lanes, that would really provide protection for cyclists?

Yeah we?d like to see more permanent infrastructure coming in. So we?ve seen a good amount of progress kind of getting the more temporary infrastructure in on the street. But, yeah, we?d certainly love to see a greater benefit with curbs and landscaping and pedestrian refuge islands and some of those other elements that can provide even greater protection for everyone on the street.

[My Grid Chicago blogging partner] Steven Vance and I were curious about what’s going on with a couple of facilities. I was wondering 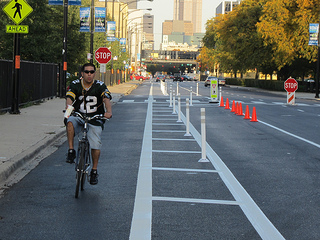 if you have any insight about this. So the Jackson Boulevard protected lane stopped at Ogden Avenue but it was supposed to go another mile east to Halsted. Do you know what’s going on with that, if we can expect that to get installed anytime?

We still expect it to be installed at some point. Yeah, we?ve been disappointed that it’s kind of stalled a bit but it’s our understanding that CDOT and IDOT (the Illinois Department of Transportation) have been trying to work out issues on it so we’re expecting them to resolve those issues and hope to see that project move forward.

We were also curious about Clark Street from Belmont Street to Diversey Street in Lakeview. Do you know why it didn’t get a protected lane? It seems like there was room for one.

I?m not familiar enough with Clark Street up there to know whether it could have been done without major tradeoffs in the street or not. That’s often the question, whether there will be major changes to the street configuration within a given width or not, which could potentially mean changes to the travel lanes or parking. It’s a different kind of decision to reconfigure the street than to put in a buffered lane where you can fit it without changes to configuration on the street. It’s a bit more involved to make those decisions about reconfiguring the entire street. But we would certainly love to see more of those conversations open, to see more protected bike lanes put in.

One thing I would add is the city has some really ambitious goals, but we really need ambitious goals to make biking safe and easy for everybody. We think really safe streets can’t come soon enough.

Photos of Lee Crandell in the Kinzie protected lane and another cyclist in the Jackson Boulevard protected lane by John Greenfield. Photos of the buffered lane on South Chicago Drive and the protected lane (under construction) in Douglas Park by Steven Vance.