On the Indianapolis Cultural Trail.

Sorry, I don’t have time to use the car to get there. That’d take too long — I’d better bike instead.

No, I don’t mean “biking saves you money and time is money.” I mean biking actually saves you time.

No, I don’t just mean during rush hour. Sure, everybody knows that in a city during rush hour, bicycles usually travel faster than cars. No, I mean biking is always more time-efficient than driving.

In fact, a study released last year found that riding a bicycle transports you from place to place instantaneously. As in, it takes no time at all.

Naturally, this study came out of the University of Utrecht. Utrecht is a Dutch city that’s about the size of Wichita, with the minor difference that about half of all trips of five miles or less in the city happen on bicycles. That means that the Utrecht scientists had really good data to analyze. They studied the habits of 50,000 Dutch people, most of whom rode bicycles for various amounts of time each day, over the course of many years. 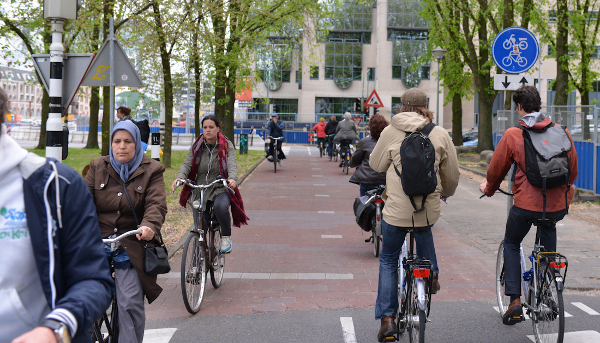 Here’s what the study found: for every additional 75 minutes a week that you spend on a bike (that is, for every 11 minutes per day) you generally increase your lifespan by six months.

This isn’t super surprising in principle. Virtually every scientific study of what makes us healthy is just a complicated way of saying one of two things that we all already know: (1) don’t eat much junk food and (2) get your heart beating for a little bit each day, the more the better. Maybe that’s why this study didn’t get wall-to-wall coverage when it came out in 2015: it seemed obvious.

But the longer you think about this finding, the more interesting it becomes.

Which comes out to … six months.

Which is exactly the amount of extra lifespan that these scientists discovered that 11 more minutes of biking per day will give you. Which means…

Every minute you spend on a bicycle increases your lifespan by one minute.

I don’t know about you, but in my case I know that riding a bicycle also makes me happier. The first day I rode a bike to work, I could feel the endorphins tingling appreciatively in my elbows.

But when I’m deciding whether to go somewhere on a bike, I still find myself weighing that happiness against time. Can I afford those extra 10 minutes? I could spend those 10 minutes writing emails, or finally organizing my desk, or just relaxing with Facebook.

But those things don’t actually make me happy. (OK, having a clean desk does, but we both know I’m not actually going to do that.) And one thing is for sure: those minutes don’t come back.

When you think about it, this study means that any time you spend on a bicycle is literally free time. Every minute you spend is coming back to you. Because bicycling is going to give you back all the time you invested, there’s no net time lost.

Which is why, if you do the math, a bicycle is basically a teleporter.

A teleporter that makes you happy.

Saves you money, too.

Beam me up, Scotty.