As protected lanes take off, will California fall behind? 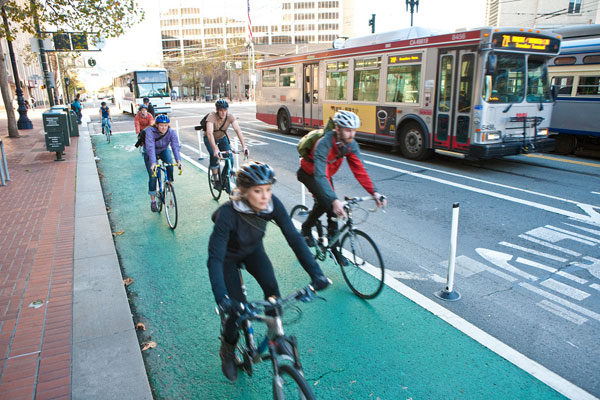 Market Street in San Francisco. Unlike most Californian cities, San Francisco has decided to build protected bike lanes without official endorsement from Caltrans.

In the fast-changing world of urban transportation, Californians are finding themselves in an unfamiliar spot: behind the curve.

As the federal endorsement of the bike-friendly NACTO guide ripples around the country, street design professionals and advocates in the country’s largest state are beginning to ask when will California is likely to follow suit.

Late last month, at the memorial service for a young man killed by a drunk driver, a Chicago alderman announced that the previously skeptical Illinois Department of Transportation would allow a protected bike lane on the street where he was hit riding his bike. The Federal Highway Administration, meanwhile, has commissioned a comprehensive new study of protected bikeway safety, and an avalanche of cities around the country are pushing protected lane plans forward.

This national shift has been rapid enough that Californians who want to encourage biking in their state are starting to look to their own department of transportation, Caltrans.

“Our DOT is sort of infamous for not having a lot of flexibility in their design standards,” said Sean Co, an active transportation planner for the Oakland-based Metropolitan Transportation Commission. Co said he regularly heard about plans that were scaled back because they didn’t meet DOT standards. “Without design guidance from our state DOT, planners’ and engineers’ hands are tied in what they’re allowed to do.”

Lanes like these simply aren’t “enough to move the needle” for most of the population’s behavior, said Dave Snyder, executive director of the California Bike Coalition. Snyder called state guidance on protected bike lanes “the single most important design change necessary to achieve our goals.”

“Under Jerry Brown’s first administration, California was the leader in the country for bicycling,” Snyder said. “And under his second administration, he has yet to tackle the design issue.”

Snyder said the stakes are raised by California’s recent reform of its active transportation funding.

“If local agencies can’t use that money in the ways necessary to attract the everyday Californians who want to bike but won’t bike in a bike lane next to high-speed traffic, then we’re not going to make the most of that investment,” Snyder said.

A hunger for state expertise 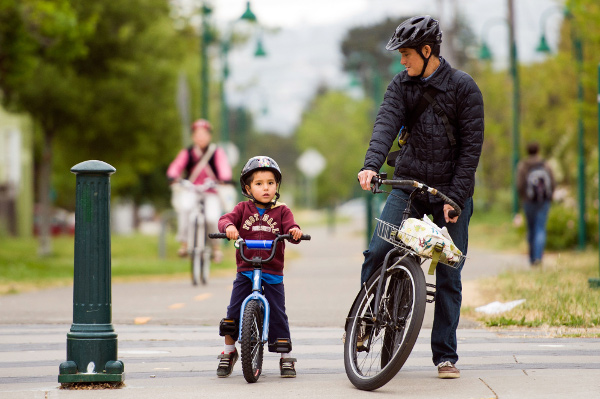 Co, the Oakland-based regional planner, said a Caltrans policy change to adopt the NACTO guide’s protected bike lane designs could change the practice in the dozens of smaller California cities where there’s interest in the new designs.

“There’s quite a few, because this is what they’re hearing from their constituents,” Co said. But small cities “don’t have the expertise to deal with the nuts and bolts.”

“They’ve got very little staff to chase it down,” he said. “They’re going to say, ‘Well, screw it. I’m just going to do something easier because I don’t want to deal with all the pushback.'”

It’s not that protected bike lanes are always easy to design, Co said. But that’s exactly why Caltrans’ role is important.

“There’s some valid issues on intersection design and everything else,” Co said. “But there’s plenty of research that says people go and seek out these facilities.”

Co said that although political pressure from the legislature has recently been effective at changing practice inside Caltrans, he doesn’t hold much hope for a quick change by Caltrans itself.

That’s too bad, he suggested, because Caltrans could contribute some of the expertise necessary to ensure that protected bike lanes are well-designed.

“As an encouragement tool, that’s what they’re looking for,” Co said. “And they need to be designed in a safe, well-thought-out manner.”