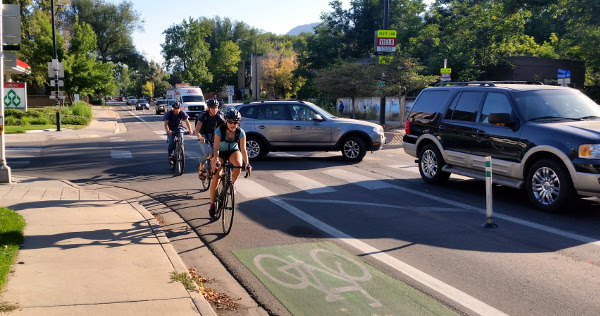 Boulder, Colo., will vote Tuesday on whether to become the fourth U.S. city to remove a modern protected bike lane.

As of last month, 75 U.S. cities (including Memphis, Portland and Boulder) have built permanent protected bike lanes, and the number of such projects is doubling every two years or so.

In Boulder, though, the latest process has taken a turn. On Thursday, city staff recommended scaling back what was planned as a year-round pilot after just 11 weeks.

That’s an unexpected change of direction for one of the four cities in the country rated as “platinum” by the League of American Bicyclists.

“This is not what we would ever expect to see for a platinum city,” the League’s Steve Clark said in an email Friday. “Or gold, or silver. Extremely bad precedent.”

The number of reported collisions on the street dropped immediately, city data show.

That’s consistent with similar turn-lane projects around the country. The Federal Highway Administration says these redesigns lead to a 19 to 47 percent drop in collisions, because they prevent the most reckless drivers from weaving between travel lanes and because they give everyone driving a clear view of people crossing the street on foot — a car driving in the curbside lane won’t block the sight line of someone else driving in the same direction.

The new center turn lane, meanwhile, cancels out most of the potential traffic delay because it gives left-turning cars a place to wait without blocking other traffic.

“Injuries from vehicle crashes rise as the width of a road increases,” says the AARP in its fact sheet about turn-lane projects, which go by a variety of names including “road diets” and the one used in Boulder: “right-sizing.”

In the case of Folsom, the redesign had a side benefit: it let the city widen the existing bike lanes and add plastic posts to turn them into protected bike lanes.

The project’s installation corresponded with the normal increase in biking after school returned to session, so it’s hard to know how much the lanes contributed to the immediate jump in bike use.

But because rush-hour auto volumes were so high on Folsom, and because the city had previously installed a pair of mid-block crossing signals in an effort to make the street safer to walk across, safety and increased bike use weren’t the only effects.

During its busiest time and direction, the southbound evening rush hour, it took an extra 104 seconds on average to travel the eight-tenths of a mile on Folsom between Valmont Road and Canyon Boulevard. 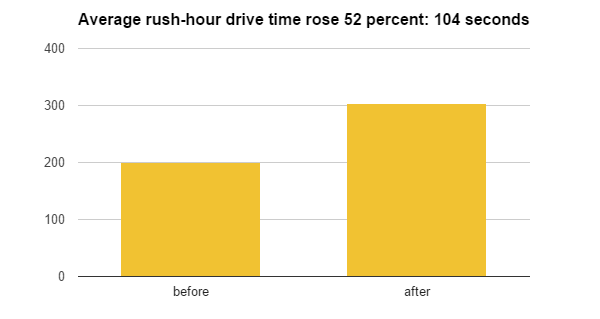 This made some Boulder residents furious.

In a letter to the Boulder Daily Camera, one week after the city’s first responders had told the newspaper that the redesign would have no effect on their work, resident Jeff Schulz painted a satirically dire scenario of what might happen in a future fire.

“The Boulder Fire Department is ready to roll, but, unfortunately, it’s rush hour and the recent lane reductions combined with all the flashing crosswalks have caused perfect gridlock everywhere,” he wrote. “Smoke can now be seen from the downtown treehouse where council members are playing rock-paper-scissors to decide on whom to train their high-powered bureaucracy cannon at next.”

Other Boulder residents favor the Folsom redesign. In part due to an organized effort from Boulder-based advocacy group PeopleForBikes to rally support among the city’s bike supporters, 57 percent of the comments the city received about the project by late August were in support.

But the other 43 percent tended to be angrier, and more likely to have contacted the city of their own volition.

“The community has been pretty clear that parts of this project are not successful for them,” Councilman Sam Weaver, who had voted for the plan in June, told the Camera on Friday.

Change of course for staff and council members 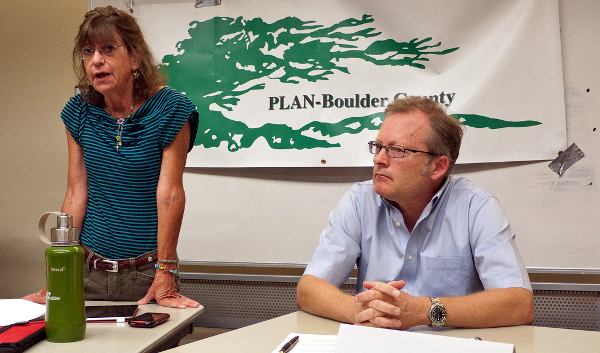 One month ago, Boulder’s council had seemingly agreed to stick with the Folsom redesign for a while.

That changed last week. Go Boulder Manager Kathleen Bracke said in an interview that staff from the city’s transportation, public works and city manager’s offices had come to a mutual decision to recommend reversing the southern half of Folsom’s redesign, a sharp turnaround from August.

Prant said Boulder’s change of direction is upsetting because it suggests to her that many residents of the famously green and well-to-do city aren’t willing to actually change their habits in order to preserve the climate.

“If they can buy their way out of the climate problem, then it’s OK, but if it’s behavior change — or allowing someone else to have behavior change — they can’t make the connection,” Prant said. “You’re never going to get everybody everywhere they want to go on multi-use paths.”

“We’re not anti-car,” Prant added. “But we are pro making safe places for people to ride bicycles. And sometimes that means that a decision needs to be made between 100 percent accommodation of automobiles and something less than that.”

If car lanes are untouchable, how can car dependence be reduced? 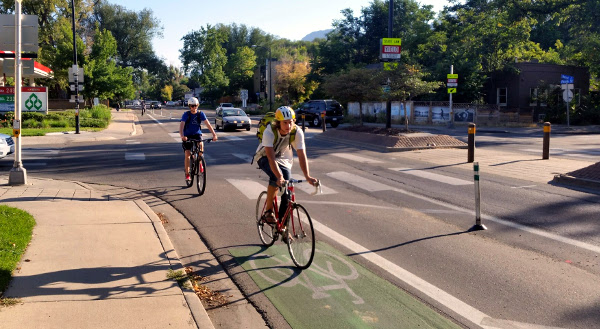 Former Boulder mayor Will Toor said in an interview that the fight over Folsom reminded him of a similar battle, when he was elected mayor in 1998, over whether the city should invest in biking and walking or should keep building ever-wider roads.

“That seemed to be a really powerful and positive argument that a wide variety of people in the community were able to see,” Toor said.

As for Boulder’s current council, Toor said that if they agree to reverse the changes to Folsom, he hopes they’ll propose alternative ways to reduce the city’s dependence on cars.

“Certainly everybody on council and who is running for council who is opposed to the protected lanes keeps saying that they want to make biking safer and more attractive,” Toor said. “I’ll take them at their word. What I would like to see people asking is if you don’t think this is the solution, what do you think the solutions are, especially for those north-south routes?”

Prant predicted that such a high-profile retreat by the city would mean that “it’s going to be a long time before you can do any major on-street improvements.” She said the city will probably try to refocus its biking investments on more off-street paths where they’re possible.

“Can you build that in every situation?” she said. “No. Even in Boulder. Even with all the money in the world.”

Correction 9/28: A previous version of this post didn’t mention that the increase in bike traffic on Folsom corresponded to the return of the school year.