A visit to a velodrome 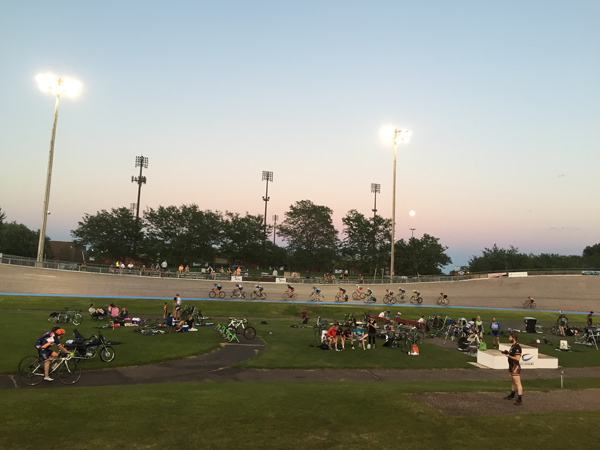 Traveling for PeopleForBikes has allowed us to experience bike riding from many different perspectives and places. Before this year, we hadn’t strayed much from riding on the road, mainly for utilitarian purposes. Earlier this year we rode on our first pump track in Philadelphia. About a month ago we acquired our first mountain bikes and have been exploring off-road cycling whenever we have the chance. This month we visited a velodrome for the first time.

In Minneapolis we stayed with Adam, a roadie and track racer who brought us to the National Sports Center’s velodrome just north of the Twin Cities in Blaine, MN, to watch some track racing. Never having watched a track race, we had a lot to learn about racing on a velodrome. Later that week, we had the chance to ride on it for ourselves.

If you’ve never ridden on a velodrome before, it’s a little intimidating when you see how steeply sloped the track is. The smaller the track, the steeper it needs to be, and the faster you need to go to not slide down. On the 250-meter NSC Velodrome, one needs to be riding at least 18mph in order to stay on the track in the 43-degree banked turns. The velodrome in Blaine is made of wood which is faster and softer to fall on, but cannot be ridden on in the rain or during the winter. It also requires regular maintenance and attention. Every Saturday, Adam and other members of the track racing community volunteer their time to work on the track, repairing and replacing broken planks, repainting the lines, and doing what they can to keep the track in good condition. 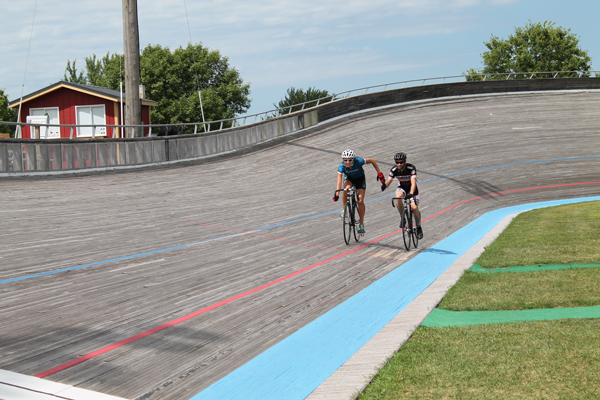 Similar to speed intervals and track workouts in running, riding on the velodrome wears you out quickly and demands resting in between short bursts of fast riding. Soon enough though, Adam decided that we were ready to try Madison throws. Madison races are relays that involve cyclists slingshotting their teammates every time they come around to lap them. Riders take turns racing as fast as they can while their teammate rides as slow as they can until they meet again along the track.

When the fast rider approaches his or her teammate, the slow rider holds out his hand for the fast guy to take it, using momentum to launch the slow rider ahead to begin his fast lap. Depending on how fast the fast rider is and how slow the slow one can go, the distance each person races per lap varies. To further complicate things, during a race, cyclists have to be hyper-aware of what’s going on and able to anticipate when an exchange is going to take place so they can stay out of the way. The acceleration created from the slingshot was exhilarating and after a few practices it became easier (and really fun). 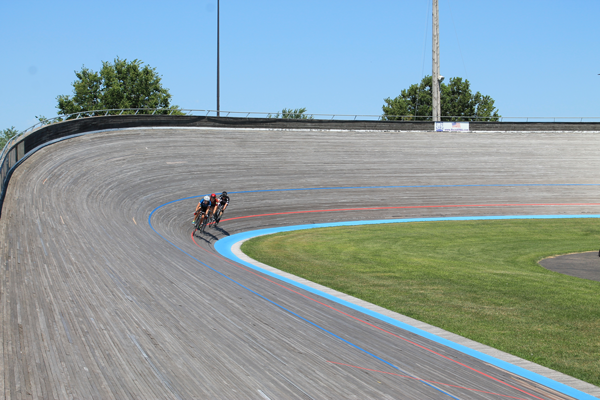 Sarah’s first few laps on the velodrome, with Adam and one other regular racer.

The NSC velodrome was originally built for the 1990 Olympic Festival but it has proven to be a valuable asset in the community that has reached far beyond talented Olympic athletes. The velodrome hosts a variety of programs, from teaching kids how to ride to their weekly Thursday night races, Olympic Trials and National Championships. With a 30-year lifespan and 26 years of enjoyment under its belt there are only 4 years of life left in it before it will be torn down. This news was sad to learn but track director Bob Williams told us about their plans to build a new velodrome. The new one will be indoors, so they will be able to use it throughout the harsh Minnesota winters.

It is doubtful that anybody could really get into track racing without a local track to practice on regularly. There are only a couple dozen fully functional velodromes scattered around the country, and they aren’t all accessible to beginner racers. It would be great to see the sport gain popularity in North America, as it teaches kids confidence in bike handling and racing, and instills in them a habit for a healthy sport that they can enjoy for a long time.